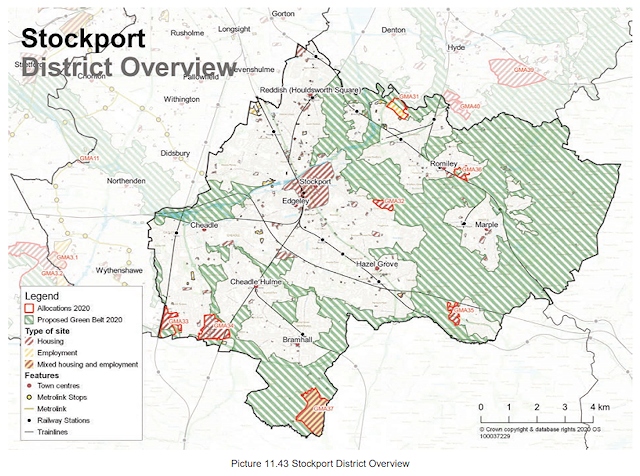 The Greater Manchester Spatial Framework appears to be dead – at least in the city-region spanning form it was originally intended – after Stockport councillors voted to reject the long-delayed masterplan.

It means that Stockport now has three years to come up with its own local plan, while the remaining nine boroughs will have to decide whether to continue with a joint blueprint or scrap the project altogether.

Following an adjournment last month, Labour offered a further 11th hour compromise to take the 500-home High Lane development out of the Stockport plan, as well as scaling down proposals for Heald Green and Woodford Aerodrome.

But this was rejected as ‘too little, too late’ by the Tories on Stockport council, while the Lib Dems also saw no reason to drop their long-standing opposition to the plan.

The sacrifice of green belt land for housing and employment sites has been at the heart of the controversy that has surrounded the GMSF since its first draft was published in 2016.

It has since undergone two rewrites and the version that went before Stockport councillors on Thursday night meant that just 1.2% of the borough’s green belt would potentially be developed over the next 17 years.

While that may seem minimal, for those in areas affected such as Heald Green, Woodford and Romiley, it was a proposal they could not accept.

Labour has argued that the GMSF is the best way to protect the vast majority of green belt from ‘cherry picking’ by developers, while delivering the homes and jobs it needs to prosper in the long term.

But opposition groups claim the plan is fundamentally flawed: based on developer wants rather than community need, relying on ‘out-dated’ statistics and failing to account for the post-pandemic and post-Brexit landscape.

Before the vote, Stockport council leader Elise Wilson made one last plea for councillors to back the ‘bold plan for jobs, homes and the environment’.

Councillor Wilson told the meeting that investment for transport, regeneration, schools and other infrastructure could be put at risk by not signing up to the masterplan – as could control over planning decisions.

But it was the opposition groups’ view – that Stockport should ditch the GMSF and pursue its own local plan – that ultimately prevailed.

The vote would appear to have rendered pending GMSF votes in town halls across the region moot, given the current 2020 plan cannot go ahead in its current form.

Whether the remaining boroughs will choose to go ahead with a ‘plan of the nine’ – as Salford Mayor Paul Dennett has called it – or each go their separate ways remains to be seen.

A spokesperson for the Greater Manchester Combined Authority (GMCA) said: “While we regret the position that has been taken by Stockport councillors and the implications this will have for the borough, Greater Manchester will continue to work to build a sustainable future with good homes, jobs, and growth.

“Greater Manchester leaders will meet to consider the next steps in the coming days after Stockport Council’s Cabinet has met and taken the final decision on the GMSF.”