You are Here: Home » News » News Headlines » Reunited for Christmas 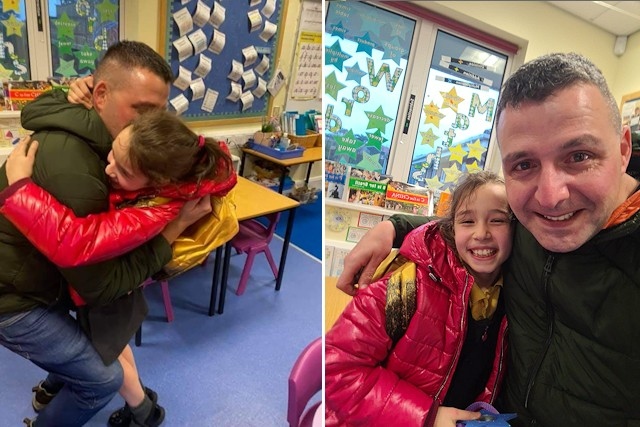 Paul Ellison with his daughter Bonnie

It’s been 10 long months since Man of Rochdale Paul Ellison last saw his nine-year-old daughter, Bonnie, but, in a surprise that had been planned for months, the pair were reunited in time for Christmas.

Paul, who lives in Norden, last saw his daughter, who has lived on the Isle of Man with her mum for the last couple of years, in February. Since she moved out there, Paul has been a regular visitor to the island, spending many weekends with Bonnie – until March 2020.

After that visit in February, Paul next planned to fly out at the start of March – but FlyBe went bust and airline ticket prices shot through the roof.

“I’ll see you for a week at Easter instead,” Paul promised, unaware that this too would not go ahead as the country was plunged into a national lockdown.

Since then, Paul has spent many hours on video-calls with his only daughter, unable to see her due to the restrictions on travel, and because the Isle of Man borders were closed to non-residents.

He said: “It’s been a very difficult year. We’ve missed out on lots of time together and doing fun things like going to the park and go-karting, but we’ve also missed out on smaller things, like cuddles and watching television. I missed Bonnie’s birthday this year, which was also hard.”

However, after a heartfelt plea, Paul was granted special permission with a duty of care to visit the island in December so he could look after and see his young daughter after a mandatory period of self-isolation.

Self-isolation complete, the pair were reunited in an emotional embrace on Friday 18 December at Bonnie’s school; a reunion planned by Paul for many weeks as he kept his daughter in the dark about the Christmas miracle.

“I’ve got a magical Christmas planned. Bonnie was last in England last Christmas and New Year, and it’s been hard to bring her back because of Covid restrictions. I can’t express how much I’m looking forward to just spending Christmas with my daughter,” he added. “Bonnie’s been saying to me all year that when we see each other again, we’ll have a huge plate of meatballs, her favourite food.

“I’ve got the biggest plate of meatballs ready; the ‘Bonnie and Daddy Special’.”

Paul and Bonnie will now have a couple of action-packed weeks together before Paul returns home in early January, but he’s hoping he can visit the island more frequently come spring.