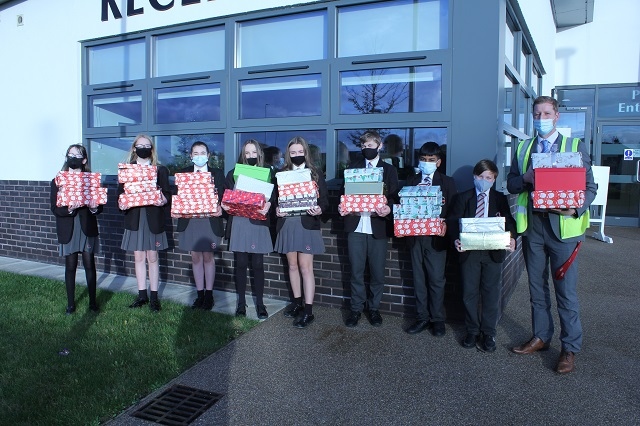 Students at St Cuthbert’s were busy during the festive period raising money to help out the Rochdale community.

Pupils took part in in all kinds of activities during the last few weeks of term, including a Christmas Jumper Day and ‘Pay to Play’ sports on the all-weather pitch. The winner of guess how many mentos in the jar was Travis Docherty-Hughes, who guessed the closest with 230.

A total of £460 was raised for Springhill Hospice.

An incredible 3,742 food items were also donated over three weeks for the Rochdale foodbank. One member of staff from the school said they were “overwhelmed by the amazing response this year.”

Furthermore, 52 shoeboxes created by Year Seven have been donated as part of the Operation Christmas Child and Manchester ShoeBox Appeal. Students were challenged to think about others in a time where it is very easy to think about ourselves. Each form was set a challenge to try and create shoeboxes which would then be given to those who are less fortunate.

Head of Year Seven, Mr Lockett said: “I could not be prouder on how students took to this challenge. A huge well done to anyone who contributed towards this.”