You are Here: Home » News » News Headlines » Cat missing for 12 years who lived life as a stray rewarded with fur-ever home 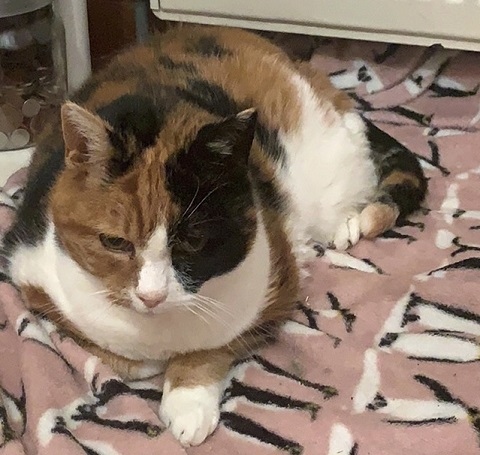 Georgie in her new home

A cat who hit the headlines after turning up 12 years after she disappeared has found a new home where she can live out her days in peace and quiet.

Georgie was discovered to have been living in the grounds of a Loch Lomond campsite where she had gone missing years earlier when her owners from Rochdale took her with them on a family camping holiday.

She vanished during the trip and despite efforts to trace her, Georgie’s owners had to make the 250-mile trip home without her in the hope that her microchip would eventually help reunite them – not realising this would take 12 years.

Despite Georgie becoming a much-loved fixture around the campsite, being fed by campers and staff at the Queen Elizabeth Forest Park site in Rowardennen, she was still living the tough life of a stray, enduring the harsh winters out in the open.

When the campsite was forced to close during the first Scottish lockdown, meaning there would be no-one on site to keep their eye on her, staff called in Cats Protection for help. The charity’s Glasgow Adoption Centre, in line with protocol, scanned for a microchip, and traced her original owner.

Owner Amy Davies was surprised and overjoyed to learn Georgie had been found after so many years, but a change in her personal circumstances unfortunately meant she was unable to have Georgie back, so made the difficult decision to allow her to be adopted.

Georgie remained at the adoption centre for four months while dedicated staff gave her time and space to recuperate. At the age of 16, she had a list of health problems including thyroid and dental issues which needed treatment, as well as arthritis.

Margaret said: “It’s always good to have a wee cat. I hadn’t heard about Georgie’s story when I was looking at the centre’s website, but I was looking to home a cat that other people might not want. I was heartbroken when I heard what a tough life she’d had.

“Years ago, my old cat Poppy escaped on a trip to the vets and I never gave up searching for her, putting up flyers and leaflets through doors. She turned up after six weeks of living in the wild, including through fireworks night, and I was so happy.”

Georgie came to live with Margaret before Christmas and has settled in well to her new home, spending much of her time in her favourite spot on a memory foam mattress by the radiator. She continues to be on regular medication for arthritis and her healthy appetite has seen her put on weight.

She also shares the home with giant rabbit, Rupert, and an occasional visitor into the house, Ruby, Margaret’s pet hen.

“Georgie’s very affectionate, friendly and loving and will come in and in say hello when I’m sitting in the lounge, before returning to her bed. She could go out if she wanted but she isn’t very mobile and prefers to stay indoors after such a long time spent living outdoors. Georgie pays no attention to the rabbit, who is bigger than her, or the hen!”

Glasgow Adoption Centre manager Andy Currie said: “We are delighted Georgie has found a home where she will be able to live a quiet, stress-free life after so many years living the life of a stray. We wish them all the best for the future.

“We also want to remind people of the importance of microchipping, and keeping registration details updated, so that if your cat should unfortunately go missing there is a much better chance of being reunited.”

Microchipping is a simple procedure which involves placing a chip the size of a grain of rice beneath a cat’s skin. It contains an owner’s contact details and can be easily updated by a vet. It is a safe and permanent way to identify a cat and the best way to ensure lost cats are returned to their loving families.