You are Here: Home » News » News Headlines » Leaders urge residents to have their say on the future of Greater Manchester’s buses 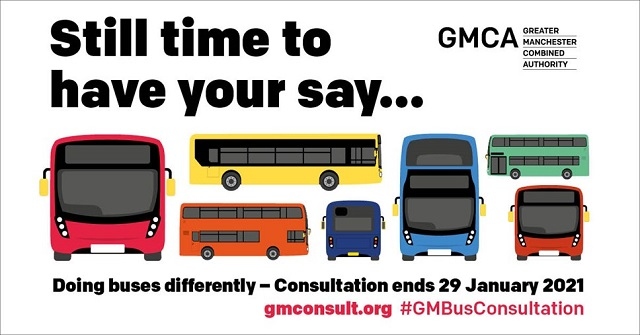 Thousands of people have already engaged with the consultation

Local leaders are urging all residents and organisations across Greater Manchester to make sure their voices are heard on the future of the city-region’s buses as a major consultation enters its final weeks.

Thousands of people have already engaged with the consultation, which is being carried out by Greater Manchester Combined Authority (GMCA) to gather views on the impact of Covid-19 on its proposals for how buses should be run.

However, there’s still time for many more to get involved by having their say at www.gmconsult.org before midnight on Friday 29 January.

Three in four public transport journeys made in Greater Manchester before and during the Covid-19 pandemic are by bus and they continue to be a critical link to jobs and essential services; especially for some of Greater Manchester’s poorest and most vulnerable communities and those without a car.

Currently in Greater Manchester buses are run by commercial bus companies who decide the routes, timetables, tickets and standards. In areas they don’t run services, the public sector pays to fill in the gaps in the market, where it can.

Between October 2019 and January 2020, GMCA held a consultation on a proposed franchising scheme for the city-region’s buses. Under franchising, bus services would be brought under local control. GMCA would coordinate and invest in the bus network based on the services passengers need. The bus operators would be contracted by GMCA to run the services.

Over 8,500 individuals and organisations gave their views in the previous consultation, with four out of five respondents, who answered the relevant question, supporting the proposed franchising scheme.

In June 2020, GMCA received the results of the consultation but decided, before a final decision could be made that the impact of Covid-19 on the bus market and the proposed franchising scheme should be considered.

Sir Richard Leese, Deputy Mayor of Greater Manchester, said: “Throughout the pandemic, we’ve seen that buses are the backbone of our public transport system and they have been essential for large numbers of key workers to get to work and others to travel to work, education or care for people in need.

“However, we need our buses to be part of an integrated network, so getting around is easy, accessible and affordable. Local control over the bus system would offer us the ability in the long-term to maintain the sort of network we need for people all over Greater Manchester to be able to get to work, to school, the shops and able to access essential services.

“If people still want change, we need to hear from everyone as part of this consultation – whether you catch the bus in Wigan to get to school or Bolton for the shops, or you aren’t a regular bus user, we need your views. So, make sure you have your say on the future of your buses while there is still time.”

Covid-19 has caused a lot of uncertainty over how people will travel in future. So, Transport for Greater Manchester used four scenarios in a report which looked at potential future travel demand in Greater Manchester and what it could mean for GMCA’s proposals to change how buses are run.

Under all scenarios, franchising is still the best option to achieve Greater Manchester’s long-term ambition for a fully integrated public transport system and GMCA still has funding available to pay for the transition to franchising.

Under franchising, GMCA would be responsible for the bus network and that means it would have more of the financial responsibility and the risks. Depending on the impacts of Covid-19, GMCA might have to make difficult choices about the bus network in the future to manage these financial risks - such as providing further funding or making reductions to the network.

But even under the other options available – such as entering into a partnership with bus operators or making no change to the bus market – there would still be difficult choices as GMCA would need to pay to fill more of the gaps in the commercial bus network.

GMCA is undertaking this further consultation on the proposed franchising scheme in the light of the findings of this report.

The outcome of both consultations will then be considered as part of the final decision by the Mayor of Greater Manchester, Andy Burnham, on whether to implement the proposed franchising scheme.

Find out more at www.gmconsult.org or call 0161 244 1100. Hard copies of the consultation document are available on request.