You are Here: Home » News » News Headlines » A grand effort from local jeweller for Springhill Hospice

A grand effort from local jeweller for Springhill Hospice 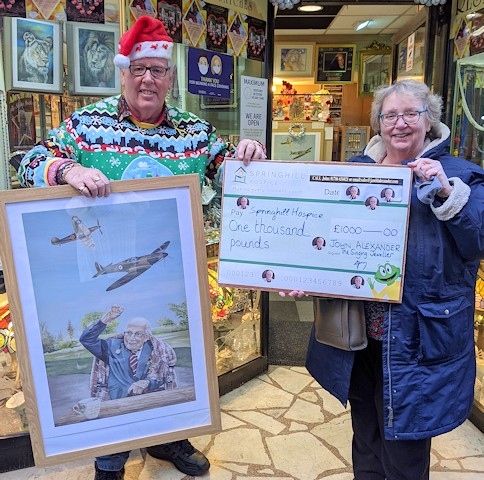 After being inspired by Captain Sir Tom Moore’s efforts to raise funds for NHS Charities by walking 100 laps of his garden for his 100th birthday, John purchased a piece of original artwork of Captain Sir Tom seated with the official RAF flypast for his 100th birthday overhead. The artwork, by local artist Lisa Haselden, now takes pride of place in John’s home, but he wanted to find a way to share the joy the painting brings him and also the enthusiasm created by Tom to raise funds for charities.

John worked with artist Lisa to produce a number of limited edition prints of the painting which were sold to raise much needed funds for local charities.

After a fantastic response, John was delighted to be able to present a £1,000 donation to Springhill Hospice from the sales of the prints.

In addition to the donation to the hospice, John has donated £700 to The British Heart Foundation and a further £600 to Rochdale's Masonic Liberty Lodge. The Masonic Lodge use donated funds to support many smaller local and national charities every year. The Lodge's fundraising continues throughout the pandemic.

Rochdale’s singing jeweller John Swinden, from J&D Alexander on The Walk, Rochdale, has brightened the lives of hundreds of people across the borough with his singing and endless charitable contributions.

John, who has owned the shop since 2002, and is also an active member of Rochdale District Freemasons, was named Man of Rochdale in 2017 due to his generosity and extraordinary fundraising efforts.

Springhill’s Community Fundraiser, Barbara Lloyd said, "Captain Sir Tom's achievement has been an inspiration to the nation. We are very proud that the hospice, together with other local causes, has been chosen to benefit from the sale of these delightful prints. John has been a wonderful champion of hospice care at Springhill over many years and this generous donation will be used in support of their care."

Throughout the pandemic, staff at Springhill Hospice have continued to provide care, advice and support to patients, and their families, living with a life-limiting illness across the borough of Rochdale.