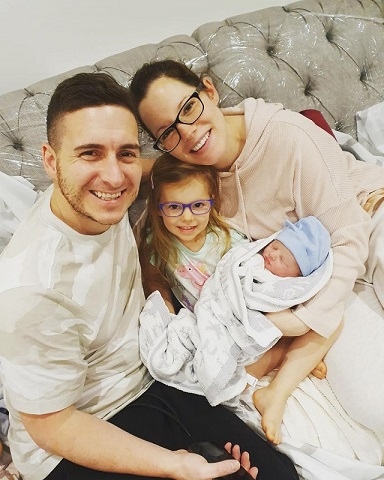 Neil and Alex with children Annabelle and Harvey

A Middleton man living with a brain tumour is celebrating the arrival of a bouncing baby boy, after undergoing gruelling cancer treatment.

Neil Taylor, 36, a franchise supervisor at McDonald’s restaurants and his wife Alex, 28, who recently qualified as a solicitor, welcomed baby Harvey into the world at 4.15am on 6 January 2021.

Harvey is a little brother to three-year-old Annabelle, who woke up on Wednesday morning to discover she’d gained a sibling during the night.

In February 2017, Neil was diagnosed with a brain tumour on his left frontal lobe. Alex was 13 weeks pregnant with Annabelle at the time. Neil had surgery to debulk the tumour in March 2017 and it was identified as a grade three astrocytoma, which would require further treatment. He had a course of radiotherapy and chemotherapy as soon as he was able to after surgery. Annabelle, the couple’s first child, was born in August 2017.

Neil said: “It was such a roller-coaster year; experiencing the joy of becoming a dad within months of receiving a devastating brain tumour diagnosis and undergoing major surgery and cancer treatment.

“We knew the chemotherapy may affect our chances of conceiving again, but despite the odds, we were so pleased when, in May 2020, we found out Alex was pregnant again.”

He said: “Alex and I were both juggling working from home and childcare for the first part of lockdown, before we were granted a period of furlough leave. It was another topsy turvy year but we, like many other families, made the most of the situation and enjoyed spending more time together at home. Obviously, going into another lockdown at the beginning of 2021, just before Harvey’s due date, wasn’t ideal but we’re both ecstatic he’s here and he’s healthy and that’s all that matters.”

Alex said: “Because of the restrictions, Neil wasn’t able to attend hospital with me for my prenatal appointments and scans, which was really disappointing. I chose to have a homebirth because I knew that it meant, whatever happened, Neil could be with me. Harvey arrived just five hours after my waters broke. I picked his middle name ‘Neil’ in honour of my husband and in acknowledgment of all he has been through and the fact that he is a wonderful father.

“We’re desperate for lockdown to be over so we can go out and show Harvey off to all our friends and family but for now we’re just enjoying him in our little family bubble and savouring every precious moment.”

Alex and Neil have been fundraising for the charity Brain Tumour Research since 2017. In 2018 they launched the Fundraising Group Neil’s Appeal with the initial aim of raising £10,000 in a year. Having raised more than £20,000 to date, the fundraising has gone from strength to strength and they now have their sights set on a £25,000 target.

Tagging themselves as #Taylorswarriors on social media, Neil and his supporters have done everything from sky dives to charity calendars, head shaves to five-a-side football tournaments. They are committed to doing all they can to help improve treatments and find a cure for this awful disease.

Neil said: “Fundraising for Brain Tumour Research has provided a great focus for Alex and me since my diagnosis and throughout my treatment. We had big plans for 2020 but sadly, like so many other charity events, they have mostly been put on hold due to the pandemic.

Neil has to be monitored with routine MRI scans every six months. Happily, the most recent scan results in September 2020 were stable, meaning he can relax for the time being. His next scan is scheduled to take place in March.

Neil added: “My last four scans have given really positive results. It’s a massive relief and I feel really well at the moment. If I get another stable result, my consultant has talked about reducing the scans to every 12 months, which in a way would be daunting but it would mark fantastic progress too.”

“A great deal of uncertainty still lies ahead but I am determined to continue to fundraise for research into this disease, which is so critically underfunded, all while enjoying my little family and making the most of every day.”

Brain tumours kill more children and adults under the age of 40 than any other cancer, yet historically just 1% of the national spend on cancer research has been allocated to this devastating disease.

Matthew Price, Community Fundraising Manager for Brain Tumour Research, said: “We were so delighted to hear the lovely news that Neil and Alex had welcomed a healthy baby boy into the world. Our huge congratulations go to them and to Annabelle, who we know is besotted with little Harvey.

“Neil and Alex have been fantastic supporters of the charity since Neil’s shock diagnosis and we can’t thank them enough for their commitment to fundraising and raising awareness. Neil’s diagnosis reminds us that brain tumours are indiscriminate; they can affect anyone at any age. What’s more, less than 20% of those diagnosed with a brain tumour survive beyond five years compared with an average of 50% across all cancers. We cannot allow this desperate situation to continue.”

To donate via their fundraising page, go to: www.justgiving.com/fundraising/Neil-Taylor27

Brain Tumour Research funds sustainable research at dedicated centres in the UK. It also campaigns for the Government and the larger cancer charities to invest more in research into brain tumours in order to speed up new treatments for patients and, ultimately, to find a cure. The charity is calling for an annual spend of £35m in order to improve survival rates and patient outcomes in line with other cancers such as breast cancer and leukaemia and is also campaigning for greater repurposing of drugs.