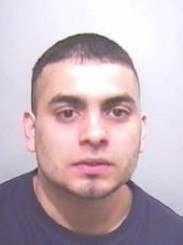 A Rochdale man has been jailed for six years after pleading guilty to fraud offences and dangerous driving.

Shahid Khan, 27, pleaded guilty at Minshull Crown Court on Thursday 21 January and was sentenced at the same hearing.

Following an investigation by the South East Regional Organised Crime Unit (SEROCU), Khan admitted to a conspiracy to defraud which occurred between 2 May 2017 and 29 November 2018, when he conspired to defraud numerous companies. He also admitted possession of a class A drug, namely cocaine on the 29 November 2018.

At the same hearing, Khan also pleaded guilty to one count of assault occasioning Actual Bodily Harm  and dangerous driving, which happened in Rochdale in June 2019.

He has also been disqualified from driving for five years, which will take effect after he has been released from prison, and must take an extended test.

“Some of these purchases have had catastrophic consequences on the small businesses Khan targeted, with some losing thousands of pounds.

“In total around £460,000 worth of fraudulent activity was found to be connected to Khan.

“Items such as tyres, paint and copper piping were purchased in large quantities and as the judge echoed, this was not a victimless crime.

“This case and the work which has gone in to the investigation of Khan’s crimes has shown that the evidence is so compelling he has been left with no other choice than to plead guilty.

“Crimes like this have wide reaching consequences and will be investigated thoroughly.

“Unfortunately, anyone could be targeted by those committing fraud. Our advice is to stop, challenge and protect.

“If you are a business, genuine customers would not mind you using due diligence. Take care to check the card has the same address as the items being delivered and check the security number on the card.

“Also ensure you have information from your bank about chargebacks and ask for specific advice so you can be protected in the future.

“Further information and help can be found on the Action Fraud website, the UK’s national fraud and cybercrime reporting centre.”