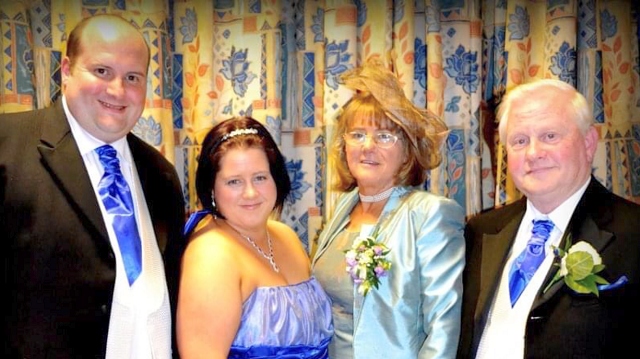 A Heywood woman has paid tribute to her brother and her father after they both died of Covid-19 just months apart.

In under a year, Suzanne Holden, of Heywood, has lost both her beloved brother and then her father to the disease – just days after the latter was evacuated from home due to a fire.

In May 2020, Suzanne unexpectedly found her brother, Alan, dead at his Fleetwood home.

An Army veteran, Alan worked as a chef in a care home. He had no underlying health conditions, but still fell victim to the virus at just 47.

During the first wave of the pandemic, he had taken a week’s holiday and was preparing to go back to work when he developed a cough.

Suzanne said: “Alan rang our parents every week on Wednesdays and Sundays. One Sunday, we hadn’t heard from him by 9pm.

“After ringing the care home, they told us he hadn’t been in for two weeks, having had a week’s holiday and then ringing in sick.”

Suzanne drove over to her brother’s house the following day where she found his body.

“Dad didn’t get over his death,” Suzanne added.

Her father, Karl Selby, who was well-known throughout Heywood, would also later contract Covid-19 after he and wife Janet had to evacuate their Agincourt Street home due to a fire next door.

Suzanne said: “Dad didn’t feel right after Christmas dinner, which we thought was because it was the first without my brother. My parents went home, and were then awakened by neighbours after a fire broke out.”

Originally, it was hoped the couple would be able to stay, but after the fire spread through the attic and partitioning wall, they were evacuated. It will be at least six months before the Selbys’ house is habitable again, Suzanne said. The couple had house insurance but this has yet to be paid out.

Janet and Karl moved in with Suzanne, her husband and their two children – but within days, the adults all caught Covid-19.

“I usually get a cold at Christmas, and because we’d been out in the night [of the fire] in the rain and cold, I put it down to that. Mum and dad were due to get their vaccines a couple of days later and we all decided to get tested.

“All the adults had it; and we all had different symptoms. I had symptoms of a cold and kept clearing my throat. I later lost my sense of taste and smell which still hasn’t returned. Dad struggled because he was tired; it took the efforts of both me and my husband to carry him upstairs.

“My husband was aching and had a bit of a cough; mum slept a lot.”

Suzanne admitted she was initially more concerned for her mum’s health, having had cancer prior to the start of the pandemic.

“We don’t know where it came from. My work hasn’t got it, and my husband and kids were off school and work at home.

“We formed a bubble with mum and dad because I was taking dad to appointments. We did everything by the book, wearing a mask, using hand gel, everything.”

On New Year’s Day, Karl was taken to the Royal Oldham Hospital after his condition deteriorated before sadly dying on 9 January – just three days before his 75th birthday.

“I can’t speak highly enough of the hospital. Their communications and consultants phoned each day and tried everything, antibiotics, steroids, because nothing was working.”

Whilst Janet was unfortunately not allowed to see her husband of 56 years due to her prior illness, Suzanne was allowed to go and sit with her father, which she says has given her “some closure.”

“Dad had lots of friends. He couldn’t go out without seeing someone he knew. He was the sort of person to give you the last pound in his pocket. Bowls was a big part of his life – he was the chairman of Bullough Moor Bowling Club in Heywood – and he would pick the ladies up for bingo and then take them home again afterwards. That’s just who he was.”

Janet will continue to live with her daughter until her home is ready. A fundraiser started on Boxing Day has also been set up to help with repairs, and donations can be made via GoFundMe:

In a Facebook post, the Heywood Bowls League said: “It is with great sadness that we announce the passing of Bullough Moor Chairman Karl Selby.

“Beyond being an absolute gentleman, Karl played a significant role in junior bowls in the Heywood area for decades, teaching youngsters how to play and getting them into the sport. He will be a huge miss to bowling, Heywood and the local community.

“Our condolences are with his family during this tragic time. Rest in peace, Karl.”

Karl’s funeral takes place at 12pm on Tuesday 26 January at St James’ Church in Heywood before moving to Rochdale Crematorium.

Due to the coronavirus funeral restrictions, only those who have had a personal invite can attend the venues, but mourners are welcome to line the street.

Karl’s funeral will be streamed via Obitus and YouTube for those who still wish to be present.

Donations to the church are requested in lieu of flowers.