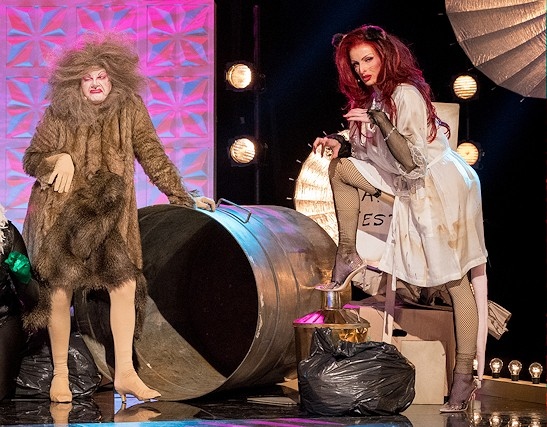 Veronica Green proved she is definitely one to watch in RuPaul’s Drag Race UK competition after she was crowned overall winner of the second episode which aired on Thursday (21 January).

The pressure was on the remaining 11 contestants of series two as their singing, acting, and dancing skills were put to the test in Rats - The Rusical, Drag Race's first ever live musical and a spin-off of Andrew Lloyd Webber’s popular Cats.

Shown on BBC iPlayer, ‘Lancashire lass’ Veronica wowed the judges after taking control of the seductive lead ‘Evita Von Fleas’. The 35-year-old gave a strong performance and her experience in theatre showed, as she sported a skin-tight, nude suit and a voluminous red wig, similar to that of the equally sultry Jessica Rabbit.

Her stage presence shone in the promiscuous role and - with the reveal of a pair of mouse toy pasties under her silk robe - Miss Green stole the show, hitting every note perfectly.

The second half of the episode’s challenge was shown on the runway, where for a “Surprise Surprise” category, Veronica appeared dressed as a Stepford Wife. Influenced by the 1975 thriller and 2004 film adaption, the Rochdale drag queen transformed from a perfect 50s housewife into a shiny gold robot right before the judges' eyes.

West End star Sheridan Smith joined RuPaul, Michelle Visage and Alan Carr on the judging panel for episode two, and underdog Veronica earned 10s from across the board.

The challenge saw Veronica Green earn herself a RuPeter badge as the overall winner of the maxi-challenge and second episode, while Cherry Valentine, who lives in Manchester but is originally from Darlington, was eliminated from the competition.

Speaking to a massive 58,200 followers on Instagram, Veronica said: “Performing as Evita Von Fleas in ‘RATS’ The Rusical was so much fun.

“I’ve never fought so hard for a role my whole life and I'm just glad it paid off earning me a gorgeous RuPeter badge!”

Even though it has aired in America since 2009, RuPaul’s Drag Race only travelled overseas to hit UK screens in 2019. The second series, which will run for ten weeks, will see the return of the judging panel – RuPaul himself, Michelle Visage, Graham Norton and Alan Carr. Each episode will also include a celebrity guest judge.

Kevin Grogan, otherwise known as Veronica Green, is a former pupil at Springhill High School (now Kingsway Park) and was raised in Rochdale before moving to London to further his career in musical theatre.

Series 2 of RuPaul’s Drag Race UK airs on BBC iPlayer every Thursday at 7pm and each episode is shown on BBC1, late the following Monday night (times vary).