Hive22’s virtual “Run2Remember” for those killed in Manchester Arena bombing 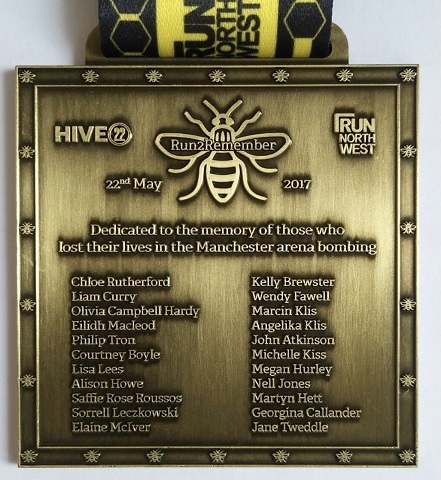 A virtual run in memory of the 22 people killed in the Manchester Arena bombing will take place this year.

Hosted by the Hive22 running club, the Run2Remember event is a virtual run of any distance to be completed at leisure until 30 September 2021.

Hive22 was established in 2019 by Aaron Parmar, who was a police officer at the arena on the night of the horrific terrorist attack in 2017, witnessing the physical and emotional devastation caused.

After moving to the fire service, Aaron decided to show his support for the 22 victims by running 22 10k races in their honour, engraving each medal with their names and giving them to the families.

Over £10,000 has been raised by Hive 22 for the charities set up by the families of the victims killed: Liv's Trust CIO, Chloe & Liam Together Forever Trust, The Remembering Nell Foundation, Eilidh’s Trust, The Megan Hurley Foundation, and 22MCR.

The Run2Remember race costs just £17 to enter, and all proceeds will be shared equally amongst the aforementioned charities.

Proof of distance is not needed, and a bespoke finishers’ medal will be issued to all who complete their chosen distance.