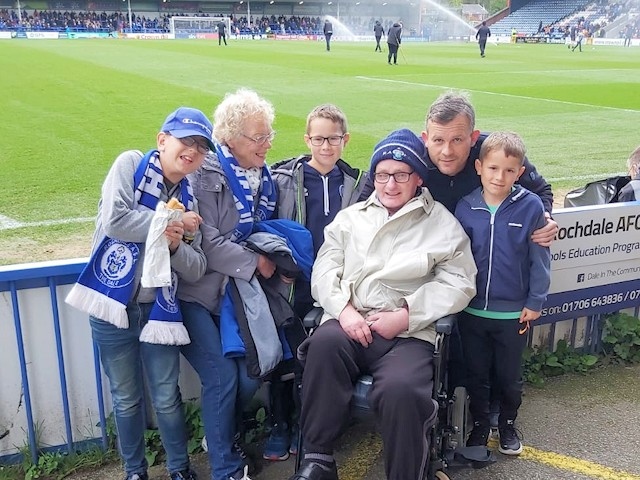 David Clough (third from right) at a Rochdale match

Over £10,000 has been raised towards the lifesize statue honouring Rochdale ‘superfan’ David Clough.

The fans want to retire David's seat in the ground's main stand and replace it with a statue of 'Cloughie' as he was known, sat overlooking the pitch.

The fundraiser was started last month by fellow Dale fan, Mark Cryer, who said: “We’re absolutely overwhelmed by support from the football family; fans from all over the country have donated. It’s been incredible.”

Executor of David’s estate, and friend, Richard Wild said: “We’ve raised more than we thought we would, so thank you so much to everyone who has contributed.

“The next stage is designing the statue and getting it finished off. We’re in contact with two sculptors and looking at quotations; I think we’re a little short on getting a fully bronzed figure.

“We will certainly get a statue which does Cloughie justice.”

David, 78, devoted his life to Rochdale Football Club and on his death last June, he bequeathed his entire estate to his beloved Dale.

David, who lived in Littleborough and worked at the former Whittles Bakery, was a goldbond agent for over 25 years and served an incredible 800 members. During his time as a Goldbond agent, it is estimated he raised over half a million pounds for the club.

The idea for a statue was taken from Spanish side Valencia, who did something similar for a supporter of their club in 2019. The club commissioned a bronze statue of fan Vicente Navarro Aparicio to be installed in his seat at their Mestalla Ground after he devoted his life to the club and still watched matches despite losing his sight.

David’s bequest – approaching £250,000 - will be used to buy a new electronic scoreboard for the Crown Oil Arena, expected to be in place by Easter.

In addition to a new scoreboard, David's estate will also fund an air conditioning system and a new ceiling to be installed in the 1907 Lounge. David was a season ticket holder in the main stand and he would be delighted that supporters will be able to take advantage of the upgraded facilities.

Donations can still be made via JustGiving; please visit: