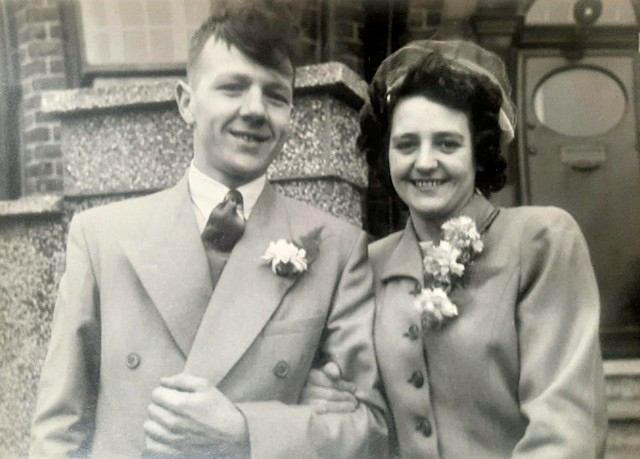 Gordon and Sheila Platt on their wedding day in 1951

Also known as the platinum anniversary, the pair celebrated the occasion with a kiss, song, and dance as a Valentine’s party was hosted at Barley View Care Home in Whitworth, where they are residents.

95-year-old Gordon met Sheila, 94, while working with her brother Jim on a farm in Newhey. Sheila was 14 at the time and they became close friends.

Sheila used to work in cotton mills, whilst Gordon worked on a farm and then for a company making slot machines called Coin Controls.

Sheila was made redundant and, subsequently, Gordon's boss made her a job up as a brew maker, known as the kitchen manager.

Their strongest memory of their wedding day was the weather, describing a ‘snowy blizzard’ and ‘how the central heating in the church had packed in so it was freezing!’

The two didn’t go out for dates much when they were younger, but over the years have enjoyed lots of lovely holidays together, especially Malta.

Before moving into Barley View Care Home in Whitworth, the happy couple lived in a rented cottage in Newhey for a few years before buying a house on Shaw Road.

According to Gordon, the secret to a happy marriage is saying, “Yes Dear”.

Sheila believes it is having a good sense of humour.