You are Here: Home » News » News Headlines » Market traders assured there are no plans to ‘move the bulldozers in’ as council adopts new town centre masterplan 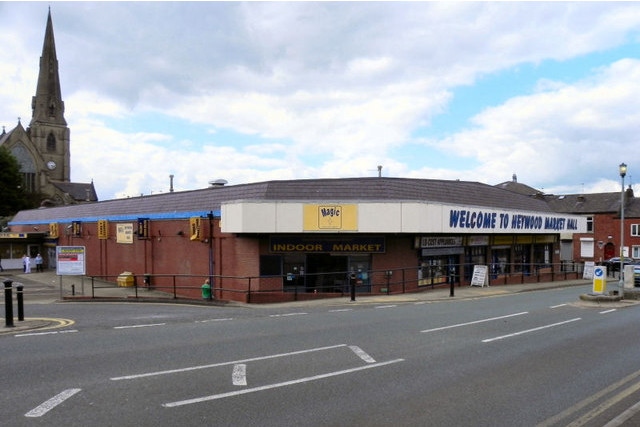 Heywood market traders have been assured the council has no plans to ‘move the bulldozers in’ under a new masterplan for the town centre.

The document, which will shortly go out to public consultation, is aimed at making ‘Heywood a characterful and attractive town for the local community and city region’.

Its ambitions include providing ‘more comfort for pedestrians in the town centre and creating ‘a place for people to stop and stay’.

Although it does not feature detailed plans it sets out a long-term strategy for an ‘improved pedestrian experience’, with reduced traffic and better parking.

Angel Meadow is earmarked as a ‘key’ area for future housing and residential development.

Rochdale council also wants to develop a ‘civic heart’ in the town ‘as a bookend to a focussed and joyful, characterful, active high street’.

While the strategy paints an attractive picture of a future Heywood, it has left concerned traders fearing the market’s days could be numbered.

But they were assured this was not the case when the plan was adopted at a Heywood Township meeting on Monday night.

Councillor John Blundell, cabinet member for a thriving economy, said redevelopment did not mean ‘the bulldozers come in tomorrow’ – and the only changes to the market would be those traders’ wanted.

He said: “I can assure you nothing will happen with Heywood Market or that area unless the people there want it to happen.

“The council is not in the game of trying to force developments where people don’t want them.”

The masterplan sets out two indicative options – both of which mark the area around the market for development – but Councillor Blundell said traders should not be unduly concerned.

He said: “I don’t think what’s in mind is wholesale redevelopment – flattening it and rebuilding it. I don’t think that’s what anybody has in mind, It’s more about refurbishment.”

Councillor Blundell said the council was only interested in complementing the ‘exciting’ plans already in train at the market, where a £300,000 overhaul has just got underway

“Whatever we do that [the market] has to be a central focal point of Heywood,” he added.

His sentiments were echoed by township chair Councillor Peter Rush, who assured traders that all Heywood councillors ‘think the world of the market’ and are looking forward to supporting it in future.

The meeting was also addressed by Paul Moore, the council’s head of planning.

Mr Moore said it would be of ‘crucial’ importance to have a masterplan in place when it came to applying for grants in future – particularly from the government’s ‘Levelling Up’ fund.

“The absence of any masterplan would seriously hinder the ability of us to do so,” he said.

The masterplan was unanimously adopted by all Heywood councillors entitled to vote on the matter.

But that excluded independent councillors Jacqui Beswick and Alan McCarthy, who could not vote as they are both directors of the Heywood Market board.

Following the meeting the ex-Labour pair put out a joint statement claiming the plans put the market and surrounding businesses ‘at serious potential risk’.

It reads: “We are deeply concerned that there has been no prior consultation with the residents of Heywood or the Heywood Business Group and we firmly believe the masterplan should be a vision for the future that meets Heywood’s needs.

“We suspect another block of residential flats with retail premises at floor level could well be the outcome in its place [the market] and/or a possible reduced footprint for the market which would make it unsustainable.

“Either way there would probably be a necessity to decant from the premises for an extended period whilst the development went ahead which would put the market and its traders under immense financial strain.”

And in conclusion, it adds: “This masterplan, in our view will rip the heart out of Heywood – Labour call it progress – we call it destruction.”

Responding to the masterplan, Susan Coates, Chairperson of Heywood Magic Development Trust which runs the market, said: “Heywood Market is a community market. We are a community asset in that we facilitate 36 businesses existing and new. There is a selection of businesses in Heywood who we have helped along the way at one time start up on Heywood Market before moving on to bigger premises of their own.

“Heywood Market is a nonprofit and nonpolitical market whose only interest is to help maintain business in Heywood to provide a service and sustain a living for them and their families from their businesses.

“The market has always appreciated everyone’s continued support of the market and to help and support the traders and the community. Going forward, the board of Heywood Magic Development Trust Ltd (Heywood Market) felt that the market needed a new lease of life and decided that a refurbishment of the market was required and have invested £300,000 in this project themselves with no funding from any other sources.

“I attended the meeting on the 15 February and asked questions pertinent to the future of Heywood Market, one of which was an explanation as to what the development of this area actually meant.

“Councillor Blundell asked Mr Moore to reply in writing to me within the next ten days. On receipt of this I will be able to respond in greater depth. I explained that over the last two years we have been working with Rochdale Borough Council, our landlord which has the power to influence the future of Heywood Market.

“It was gratifying to hear the future seems secure and safe for the market. We are therefore at a loss as to why we appear in all of the four options of the Masterplan in the first place.”

The meeting of Heywood Township committee was held on Monday night (15 February).