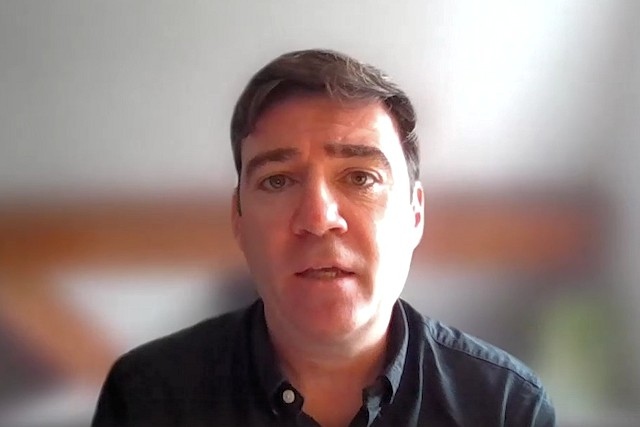 Andy Burnham at the press conference on 17 February

The mayor was joined by his deputy for policing and crime, Baroness Beverley Hughes, who revealed the latest data on compliance with Covid-related rules.

She reported a ‘resurgence’ in very large gatherings including a wedding in Oldham, a party in the Beetham Tower and a yoga session in Stockport.

Pressure is easing in Greater Manchester’s hospitals, the metro mayor revealed, but he said the ‘flickering up’ in Covid cases in Bury and Tameside is a cause for concern, as is a ‘surprising’ rise in cases within care homes.

The latest figures on vaccinations, including how many people who have not accepted the jab, was also revealed as the mayor called on the government to consider opening up the mass vaccination centre at the Etihad to over-50s.

He also called on the Health and Safety Executive (HSE) to reconsider its recent decision not to classify Covid as a ‘serious’ workplace risk.

Etihad vaccination centre should be opened up to younger people

The mayor, who visited the mass vaccination centre at the Etihad last week, praised the ‘dedicated’ staff running the operation overseen by NHS England.

But he said many people are choosing to ‘go local’, meaning the facility is often operating below 50% capacity – and ‘much lower’ than that on some days.

Mr Burnham said there is a ‘strong case’ to use the full capacity at the Etihad and called on the government to consider opening it up to everyone over 50.

He said: “The vaccination programme is going really well. But obviously as we enter new phases, new challenges will arise and I think it’s becoming clear now that we need to open up the mass vaccination centre to people who are perhaps younger, more mobile.”

He also suggested allowing Greater Manchester to use spare capacity at the Etihad, but said that opening up the national booking system would be simpler.

The mayor said his office has continued to receive complaints from members of the public about certain workplaces as it has throughout the pandemic.

He believes there has not been enough focus on workplace safety over the last year and criticised the Health and Safety Executive (HSE) for classifying Covid-19 as a ‘signficant’ workplace risk, but not a ‘serious’ one.

Mr Burnham called on the government to ask HSE to reconsider its decision.

He said: “HSE point to the fact that the vast majority of people recover from Covid, but we don’t believe in a pandemic situation where many people have not recovered that that is the appropriate judgement to reach.”

He also reiterated calls for the government to consider ‘more substantial’ self-isolation payments with legal protections for workers who have to self-isolate.

Although Greater Manchester overall infection rate has now ‘dipped’ below 200 cases per 100,000 people, two boroughs have seen an increase.

The mayor said he has been advised that ‘caution’ was the right way to go.

He said: “The flickering up in case rates in some of our boroughs – and it happened in Bolton in the last couple of weeks as well – is a cause for concern.

“We think that is linked to the transmissibility of the new strains and the speed with which they can go through certain areas.

“All of this creates a volatile situation that needs to be managed down further before we can see a much more substantial unlocking of the economy.” 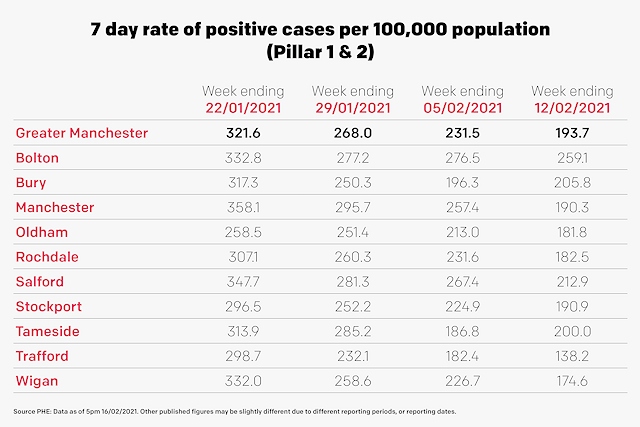 Greater Manchester Police dealt with 1,205 Covid-related incidents in the seven days up to Monday, February 15 and issued 228 Fixed Penalty Notices.

One ‘very large’ event in Salford resulted in 32 Fixed Penalty Notices of £800.

Police released footage of a large party in the Beetham Tower on Deansgate running from Friday night through Saturday, ending up in a 50-person fight.

The owner is now being pursued for a £10,000 fine as is the organiser of a ‘very large yoga gathering’ in Stockport, the deputy mayor revealed.

Other incidents included a ‘works party’ in an industrial estate in Salford and a wedding party in Oldham, alongside a recent rise in gyms found to be open.

The mayor described the news that 90% of over-70s have had their first vaccination as an ‘incredible achievement’ which is ‘something to celebrate’.

He also revealed that nearly half of all over-50s in Greater Manchester have now been vaccinated and 29% of all over-18s have had their first jab too.

The total number of people having received their first dose is now 639,128.

But he revealed that 72,000 people have not accepted the vaccine so far.

He said: “We’re not giving up on them. We are going to try and persuade more and more of them to come forward. It might be that some of them are housebound and it’s taken longer to get to those people, but I know that colleagues in primary care are going to continue to work on that.”

The number of weekly admissions to Greater Manchester’s hospitals for Covid-19 has fallen to 193, almost half as many as at the end of January.

Around 83% of hospitals are currently occupied within the local NHS system and 17% of hospital patients have Covid, down from 30% a few weeks ago.

The mayor said there has also been a ‘slight easing’ of pressure in critical care.

He said: “There’s certainly signs of improvement. It’s early to say that the NHS is, if you like, in a position where it’s out of the woods.

“But it’s obviously positive news to see this improvement.”

Mr Burnham did, however, reveal there has been a small increase in Covid cases within care homes, with 292 people confirmed or showing symptoms. 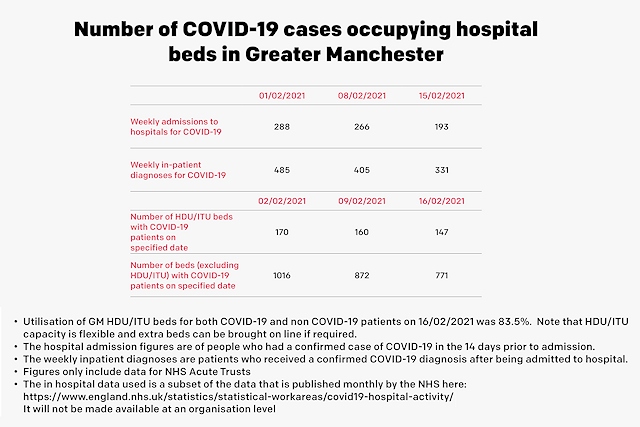 Mayor is ‘open to the idea’ of vaccine passports

When asked about the hospitality sector, Mr Burnham said he is personally open to the idea of ‘vaccine passports’ being used when venues reopen.

This could allow some venues to safely reopen to the public quicker, he said.

But he said there are a lot of issues to be considered with this idea.

He said: “It’s something that we need to think about as a part of a wider support package for the hospitality industry.”

Mr Burnham also said that furlough and other forms of financial support should remain in place until the hospitality industry is allowed to reopen.