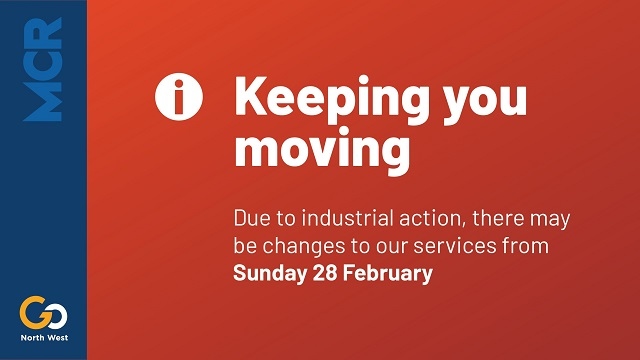 Go North West drivers are planning to strike from 28 February

Go North West bus drivers are planning to strike later this month in a dispute over pay and conditions.

Members of the Unite union employed by Go North West will walk out indefinitely from Sunday 28 February.

Locally the strike is expected to affect the 17 service between Rochdale, Middleton and Manchester Shudehill , the 18 between Langley and the Manchester Royal Infirmary and the 41 to Sale from Middleton as the only Go North West operated services in the Rochdale borough.

The union claims the company is threatening to fire and rehire workers on inferior contracts, with workers voting in favour of strike action earlier this month.

“As a consequence, Unite has had no option but to call its members out on strike.

“This will inevitably cause a great deal of disruption throughout Greater Manchester and beyond, but I hope that passengers appreciate that Unite took this action as a last resort.

“If Go Ahead were allowed to implement its fire and rehire policies it would result in our members, who have been in the frontline since the pandemic began, having to work longer for far less money.”

A spokesperson for Go North West said the strike was 'disappointing' as 83% of its drivers have 'volunteered to accept the new terms'.

The company claims the alternative to finding a solution would be to close the Cheetham Hill depot, resulting in the loss of 600 jobs.

The spokesperson added: “The deal tabled by the company ensures there will be no cuts to drivers’ pay or working hours, includes a ‘no redundancies’ undertaking, and guaranteed ‘inflation proof’ pay increases in April 2021 and April 2022. In addition, each of our drivers would receive an upfront payment of £5,000 in anticipation of the future savings improved productivity could deliver.

“Although less people than normal are using our services at present, we are conscious that strike action could hit the passengers who depend on our services most including those working in the NHS and other vital services that are keeping the region going during the pandemic.

“We are really sorry for any uncertainty that our customers may face over the coming weeks.

“We would like to thank all of our customers and stakeholders for bearing with us whilst we work towards a speedy resolution.”