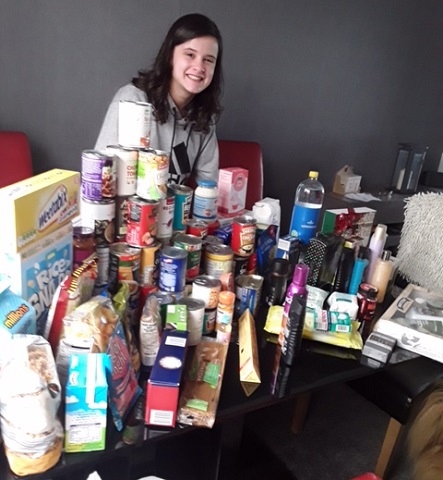 Through the many challenges of the pandemic and lockdown, one teenager has begun collecting donations for the Rochdale Foodbank from her local neighbourhood.

Sophie Griffiths, 14, who lives in Shawclough and attends Crompton House School, began asking her neighbours for donations as part of an element of her Duke of Edinburgh Bronze Medal Award.

The Duke of Edinburgh’s Award is the world’s leading youth achievement award, giving millions of 14 to 24 year olds the opportunity to be the best they can be. They achieve this through a variety of volunteering, physical, skills and residential challenges over a year alongside youth workers.

An active member of Christ Church Healey Junior Church for seven years, Sophie wanted to make a difference in the community at this testing time. As Christ Church already makes regular contributions to Rochdale Food Bank, she decided that this was a good place to start – and received a generous response.

Initially Sophie targeted and collected food from the immediate neighbourhood in Healey and Shawclough, but this was so successful that she raised her sights to include a wider area. Leaflets were printed and delivered and she has been collecting food bags for the past six weeks.

Other aspects of the award Sophie is working towards included an expedition, which was cancelled due to Covid, a physical element involving her playing football for Rochdale Ladies and her skill section, which sees her helping the coach at a Sunday Drop-and-Play session at Rochdale Football Club (currently suspended).