You are Here: Home » News » News Headlines » Man had to be rescued from tree after he got stuck 10 metres up trying to save his pet cat 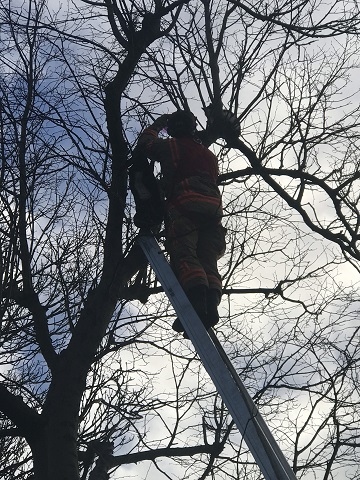 Firefighters used a 10 metre ladder which just reached the man and he was able to make his way down to safety - the cat fell from the branch he was on, landed on one below and was then able to jump down to safety

The RSPCA was called to reports of a cat stuck up in a tree in Further Heights Road, in Rochdale, on Monday (15 February).

A woman had spotted the pet in a tree in her garden where she believed he had been for five days.

Animal rescuer Stephen Wickham was on his way to the incident when he then received a call from Greater Manchester Fire Service to say they were at the scene as the cat’s owner had tried to rescue his pet and got stuck up the tree.

Firefighters used a 10 metre ladder which just reached the man and he was able to make his way down to safety.

Then a firefighter climbed the ladder to reach the stuck cat but as he went to safely grab the cat the frightened feline fell from the branch he was on, landed on one below and was then able to jump down to safety.

Steve was on hand to check the cat over and make sure he was in good health - but he ran off home.

Steve said: “I have worked for the RSPCA for 25 years and in that time I have been called to numerous cat rescues - but this is only the second time in my career I have been to a rescue where the poor owner had also got stuck up the tree too.

“In this case the owner had to be rescued from danger and as it turned out the cat managed to get down himself.

“In a vast majority of cases cats are very capable of getting themselves down from a tree, so unless there are special circumstances, we advise owners to try and coax their pet down with strong smelling food like fish and if that doesn’t work to give us a call back after 24 hours.

“After that time an RSPCA officer will then visit to see if we can help but it is important that people should not try to rescue a cat from a tree themselves.

“The RSPCA and fire service are fully trained to safely deal with these kinds of incidents.”