You are Here: Home » News » News Headlines » Bedsit plan for former pub refused on grounds it would offer ‘unacceptable standard of accommodation’ 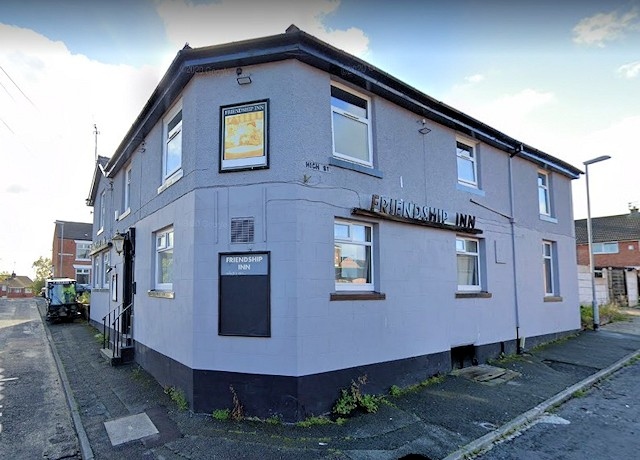 The former Friendship Inn, in Middleton

Plans to turn a former pub into bedsits have been refused on the grounds it would provide future tenants with an ‘unacceptable standard of accommodation’.

The controversial proposals would have seen The Friendship Inn, in Middleton, divided up into 11 separate bedrooms with a communal lounge and shared bathrooms.

Submitted by property firm Gluck, the application generated more than 30 objections from members of the public.

Local councillors also voiced concerns that bedsits often attract ‘transient’ tenants, who may not value ‘historic Cheapside’ as other residents do.

Other objections included the potential impact on elderly and disabled people living in specialist accommodation nearby.

The pub, at the junction of Cheapside and High Street, has been empty since 2019.

Gluck argued the proposals would not affect the character of the building or impact on neighbours’ privacy.

The firm also expected that residents would not drive as the area is so well served by public transport.

But Rochdale Council has refused the application, giving two reasons for doing so.

A decision report issued by the authority says the size of the rooms would be too small to provide tenants with a decent quality of life.

It states: “By virtue of its internal arrangements and the proposed quantum of development, the proposal would provide inadequate internal space for the occupiers and, in respect of Unit 11, an unsatisfactory standard of light and outlook.

“The proposal would therefore result in an unacceptable standard of accommodation for future occupiers, to the detriment of their residential amenity.”

Contrary to claims by the applicant, the authority also ruled that the scheme would cause road safety problems.

The report adds: “The proposed development would result in an increase in on-street parking and would increase the risk to the safety of pedestrians and highway users.

“The proposal is therefore detrimental to highway safety.”

“HMOs seem to be used as a cash cow by landlords who rarely manage these sorts of properties in a responsible and respectable manner,” he said.

“The transient and sometimes vulnerable nature of the occupants in HMOs is something that should be treated delicately by landlords  – and we’ve not seen that with other developments of this nature across the town.

“Myself, Councillor Sara Rowbotham and Councillor Donna Williams are firmly against the development of any more HMOs until legislation is in place to ensure that it no longer brings with it a risk of anti-social behaviour and its residents are properly treated.”

Under the plans, the main lounge in the bar would have been turned into a communal living room, with the former lobby turned into one of two bathrooms.

The pub’s original bathrooms were to be converted into a bedroom, while bins and cycle-storage would have been at the back of the building.

The application was refused by officers under delegated powers and was not referred to the council’s planning and licensing committee.