You are Here: Home » News » News Headlines » Redwood pupils praised by The Captain Tom Foundation after creating a statue in memory of the late veteran 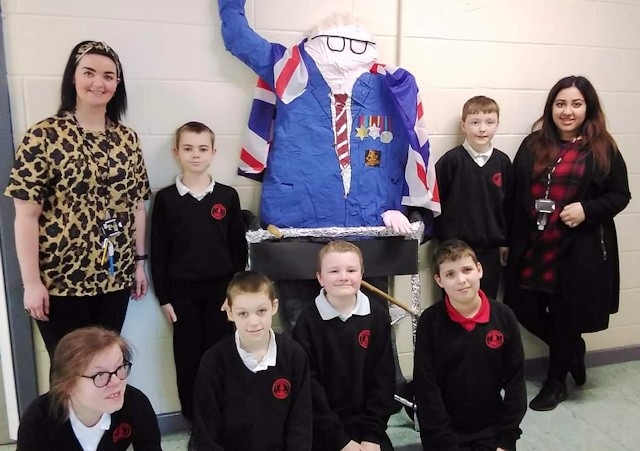 Year 7 pupils at Redwood School in Rochdale have had their work recognised by The Captain Tom Foundation after creating a memorial statue of the late captain from recycled materials.

Captain Sir Tom Moore united and won the nation’s hearts during the Covid-19 pandemic when he completed 100 laps of his garden and raised almost £38.9 million (including gift aid) for NHS charities.

The 100-year-old sadly died in Bedford Hospital on 2 February.

Inspired by the veteran, Redwood’s year 7 group worked on a variety of lessons on Captain Sir Tom Moore.

A teacher at Redwood School, Keeley Buckley commented: “Our Captain Tom work started during week six of the latest lockdown. I decided to plan this project as Captain Tom is an important part of our recent history and part of our curriculum ‘Understanding the World Around Me’.

“We began by researching the life of Captain Tom and watching a documentary about him, after which one of the pupils made replica medals, whilst one researched and wrote about each of the medals Captain Tom was awarded.”

Pupils in Year 7 also completed comprehension work and acrostic poems based on Captain Tom, before moving on to the main project – creating a statue.

“Part of our Life Skills curriculum focuses on recycling and as our pupils enjoy creative/active activities I thought it would be a great idea to incorporate the two by using recyclable materials to create a statue of Captain Tom,” added Keeley.

“The pupils were so enthusiastic and worked brilliantly as a team choosing materials to build the frame, putting on paper mache, and painting and decorating it.”

Keeley then emailed The Captain Sir Tom Moore Foundation to explain who the school were and the work the pupils had completed.

The registered charity responded: ‘It sounds like you have an incredible class of children and have done some outstanding work in remembrance of Captain Tom. We would love to see it and show it to the family.’

“We all got very excited at the thought of Captain Tom's family seeing our work,” Keeley said. “So, the pressure was on! Our pupils worked so hard to make his family happy and proud.”

After sending images of the school’s work back to the charity, The Captain Sir Tom Moore Foundation responded again: ‘What amazing work, so special and so creative! A huge thank you for your support.’

Keeley finished: “As a teacher I am extremely proud of how receptive our pupils have been to this project - which was all completed in four days! We have not only received excellent feedback from other Redwood staff, but the feedback from the foundation is gratefully received, especially at such a sad time for the foundation and Captain Tom’s family.

“My hope is that learning about Captain Tom's resilience can teach our pupils that barriers can be overcome, and they can achieve their goals.”