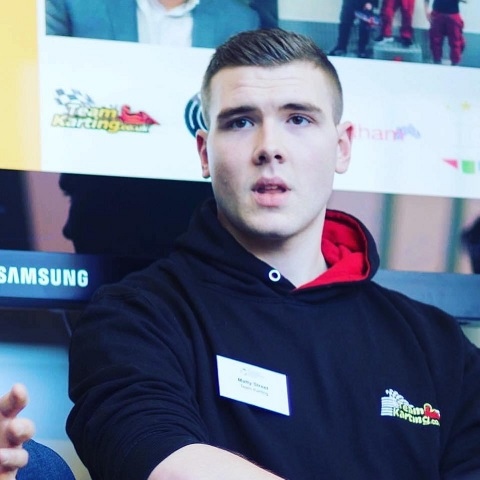 Matty Street, the 24-year-old Rochdale founder of five successful motorsports businesses, is sharing his story for World Autism Awareness Week 2021 (29 March – 4 April), in the hope that it will inspire other young people who live with autism to follow their passions when it comes to their career.

Having struggled through school with diagnoses of dyslexia, dyspraxia and Asperger’s, Matty discovered karting when he was 12. When he first took his GCSEs, just before he began a racing career, he failed them all.

When he re-took the exams, he passed everything, as his teachers began to relate his work to motorsport which helped him understand and retain information.

He studied motorsport engineering then went on to secure a degree, working at TeamKarting indoor race track throughout. Matty raised investment to buy out the TeamKarting business in 2017 when he was just 19. It is now the UK’s highest rated karting track and has won an award for being Autism Friendly. Matty is also a driver for all-disabled Team BRIT.

He launched TK-Xtra in 2019, an in-house kart race team that offers a full progression route from indoor karting to outdoor racing. Soon after, his Cadet Kart Championship was launched, which has built in popularity and is set to welcome 60 racers this year.

Having battled to keep the business alive during the coronavirus lockdowns, Matty and his business partner diversified with the launch of Xtra Treats selling sweet treats and desserts. Now, Matty has invested in the importing and re-sale of Italian X-karts, offering the brand to the UK for the very first time, along with a linked karting team.

Matty explains that he has managed to turn the impacts of his autism - his high energy and enhanced focus - into positives when it has come to his career: “I’m extremely driven and can get obsessive over things, which I’ve always used to my advantage, When I was a teenager I was obsessed with football, so at the age of 13 I started working at Oldham Football Club ground where I was eventually given a job as a kitman. I then found a new passion in motorsport, which led to my job at TeamKarting, which I now own.

“I want people to look at my story and believe that anything is possible. I was nearly kicked out of school and could have given up, so whatever the challenge you face, if you’re passionate enough about something and put the effort and belief into making it happen, it really can. Young people today are facing challenges that are different to anything we’ve seen in history, but this doesn’t have to the end of career dreams, it can be the start.”

Matty is an ambassador for autism awareness and encouraged workplaces to build inclusive recruitment practices into their businesses. He has never had an interview or had to write a CV and has integrated this into his own recruitment processes as a business owner.

World Autism Awareness Week 2021 (29 March – 4 April) aims to bring attention to the 700,000 people in the UK who are autistic, whilst educating people about the condition.

Autism is a lifelong developmental condition – it is not an illness or disease – which affects how people communicate and interact with the world.

One in 100 people are on the autism spectrum, meaning everyone with the condition has different needs or may require extra help with some things, such as making friends or getting a job.

You can read more about autism here: www.autism.org.uk/advice-and-guidance/what-is-autism