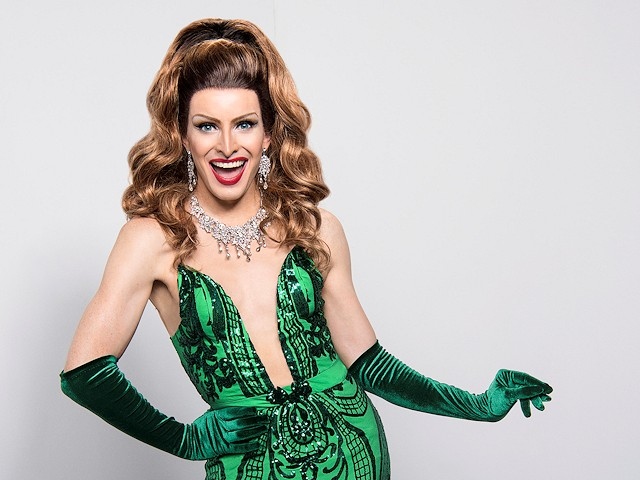 34-year-old Kevin Grogan, otherwise known as his drag alter-ego Veronica Green, is a former pupil at Springhill High School (now Kingsway Park) and was raised in Rochdale before moving to London to further his career in musical theatre.

An emotional ballad inspired by this love of musical theatre, and influenced by the 2017 film The Greatest Showman, ‘Stars’ has been available on all streaming platforms since Wednesday 31 March.

A disco mix is also available.

Writing to her 151,000 Instagram fans on the week of the single’s release, Veronica said: “Beyond excited to announce that my debut single Stars is being released this Wednesday. It is written and produced by the amazing Ian Masterson.

“Ian has worked with artists such as Kylie Minogue and Girls Aloud and is the music producer of Strictly Come Dancing. Cannot wait for you all to hear it.”

The release of the official music video soon followed – premiered on Wednesday (7 April) – in which Green once again pays homage to her musical theatre roots as she lip syncs the song behind the scenes before moving on stage.

The lyrics stay true to Veronica and her story, growing up “In a small town with small people you get used to being out of place, so your mirror becomes your world your mirror keeps you safe.”

Writing on Twitter on 7 April, Veronica said: “I can’t actually believe that my first ever music video is being released today! I’m so excited to share it.”

Series two of RuPaul’s Drag Race UK was shown on BBC iPlayer earlier this year and is still available to watch online.

Veronica Green proved she was definitely one to watch in the series after she was crowned overall winner of the second episode, and never landed in the bottom two throughout her time on the show.

Episode two’s challenge saw Miss Green earn herself a RuPeter badge as the overall winner on the runway and of the maxi-challenge ‘Rats – The Rusical’, where her singing, acting, and dancing skills wowed the judges after taking control of the seductive lead character ‘Evita Von Fleas’.

In a ‘devastating’ twist of events, Green was forced to pull out of the show after testing positive for Covid-19 but has received an open invitation from show host RuPaul himself to return for series three.

In the meantime, Veronica will be marking the opening night of theatres in London in the ‘Drag Queens of Pop’ show at the Vaudeville Theatre from 17-19 May. Alongside her will be RuPaul’s Drag Race UK series one winner The Vivienne and fellow series two contestant Tia Kofi.

The trio will take to the stage for three shows at the theatre – two more were added after the original date sold out in less than 48 hours - to perform their own music releases live, accompanied by covers of various pop hits.

Miss Green will also embark on a 41-date tour with the rest of the Drag Race UK series two cast, performing to over 87,000 people at venues across the UK. The tour will begin next year on 1 February 2022, with shows running up to 2 April.