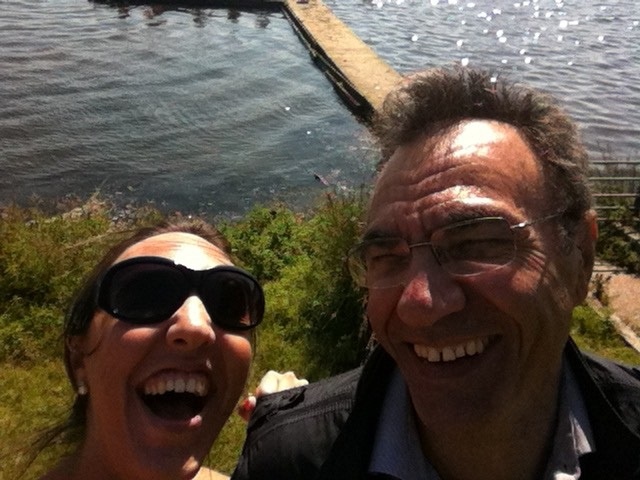 Local business owner Emma Fitton is taking on a challenge to jog 26 miles in May to raise funds for Brain Tumour Research in memory of her beloved dad.

As May is glioblastoma brain cancer awareness month, and Emma’s birthday month, the business owner is asking for people to support her in raising money for Brain Tumour Research and has bravely shared her story with Rochdale Online.

After a seizure, Mr Russo had been diagnosed with a glioblastoma tumour – which can be difficult to treat and are often incurable – two weeks before Christmas 2019, following months of headaches.

He had also previously undergone a kidney transplant after Berger’s disease led to kidney failure at just 35, and five years of dialysis. Emma says he never once complained or asked why, just accepting his fate and fighting until a successful kidney transplant operation.

“We had to watch the man we loved so much suffer [during the five years of dialysis], and our wonderful mum struggle in not only being dad’s nurse, but also running a home and bringing up us two children, supporting us in our education and lives as best as she could as well as juggling hospital appointments. Dad had a successful life-saving operation when I was studying for my A-levels, and he was given a new lease of life. He was alive, and not chained to dialysis – and that’s all we could ask for.

“Dad started to show signs of headaches in 2019. He never complained and he denied them, but I recognised he was in pain. He would tell me it was ‘nothing’ and ‘don’t worry about me’. But as the months went by, slight signs were starting to show that there was something wrong.

“Dad was sharp, bright and on the ball, but within weeks of the headaches, couldn’t remember how to post a letter. Something was drastically wrong.”

Emma joined her dad at his regular kidney appointment, telling the consultant that something wasn’t right – despite Mr Russo saying he was fine. Referred for further tests and scans, eventually a mass was found on his brain which couldn’t initially be diagnosed.

“Without brain surgery, they couldn’t diagnose it. The surgeon stood over dad’s bed and said ‘Mr Russo, I’m sorry to say I feel you have a primary brain tumour. If we don’t operate now, you will be dead within weeks.’ She then proceeded to tell him how this tumour would kill him. I sat frozen in my seat and listened as my heart broke into pieces. Hadn’t my dad suffered enough?”

Mr Russo underwent a seven-hour operation just weeks before Christmas, where a tumour the size of an orange was removed from his left temporal lobe.

“We were told it was unlikely he would survive the operation, and it was a horrific seven hours of wondering if my dad had survived. We eventually received the call to say he was alive, but that he had a glioblastoma multiform stage 4 tumour. The nightmare was intensifying and the hell was worsening.”

Emma recalled how her dad struggled finding the words to describe everyday objects, like a pen or a phone, and although he knew his family, he couldn’t remember everyone’s names.

Mr Russo was eventually discharged to go home for a last Christmas with family. Radiotherapy was proposed to try and slow the cancer’s growth, but the prognosis was poor.

“We were sent home for ‘a nice Christmas’ before radiotherapy started in the new year, but it wasn’t much of a Christmas because it felt like dad was on death row. No-one bought gifts, everyone fighting back the tears knowing this would be the last Christmas we were going to be together.”

As the new year began, things took another turn for the worst. Mr Russo became paralysed, unable to move anything other than his eyes. “Dad was trapped inside his own body, a body he could no longer use. This cancer took over him and behaved exactly like the surgeon warned.”

Over the next nine weeks, Mr Russo’s condition deteriorated further with family blending his food, and resigned to a bed in the lounge where they all once shared happy memories.

“Despite no tumour regrowth, something was still killing him. My dear dad, my best friend was starving. I searched for treatments, finding a clinic in the USA which was willing to take him and treat him using gamma ray radiation.”

Unfortunately, by the time a passport was acquired and the go-ahead given by the hospital, it was too late. Mr Russo developed gangrene from the paralysis before going into septic shock.

“We were told my dad was going to die imminently. It took three days; three days where I lay on the hospital floor, holding his hand, wishing and wishing this wasn’t happening to us. I kissed him and told him over and over how much I loved him as he took his last breaths.

“He went, and he took my heart that day too. Brain cancer took my dad and tore a hole in our family, ripping a huge void which was once filled with such happiness.”

Sadly, their heartache would continue, as only eight people were allowed to attend the funeral – and Emma and her family had to sit separately rather than comfort one another.

“We were grieving, and as a family, we weren’t allowed to hug or comfort one another. We had to sit separately at the funeral and I wasn’t allowed to put an arm around my mum or brother, or sit next to them. It was incredibly difficult.”

Emma continued: “I will be doing this 26-mile run, so that more money can be put into brain cancer research because it can happen to anyone, any age, any gender.

“There is no reason, no prevention, no treatment and no cure. It’s horrific and cruel.

“I will be running and thinking of the suffering my dad endured, and I hope to channel some of his strength to get me through and raise money to prevent future generations having to suffer the way we have.

“Dad was Italian and had a passion for family and good food. He loved cooking and enjoyed gardening, experimenting in the kitchen and the garden. Just before he fell ill, he was grafting roses to make new hybrids. He was exciting to be around, fun and funny with the biggest, brightest smile, strong embrace and a loving jovial personality.

“He was always playing with his grandchildren and telling us stories about his days growing up in Italy, where he loved to travel to often. Dad was proud to show us his home country and showed us such beauty. He taught us all how to appreciate life and love, and hearts were always full when we together.

“Your contribution will make an impact: whether you donate £5 or £100, every penny makes a real difference.”

Brain Tumour Research’s Jog 26 Miles in May Challenge is a new virtual challenge for 2021, aiming to raise vital funds to find a cure for the devastating disease. Emma plans to run two miles each day.