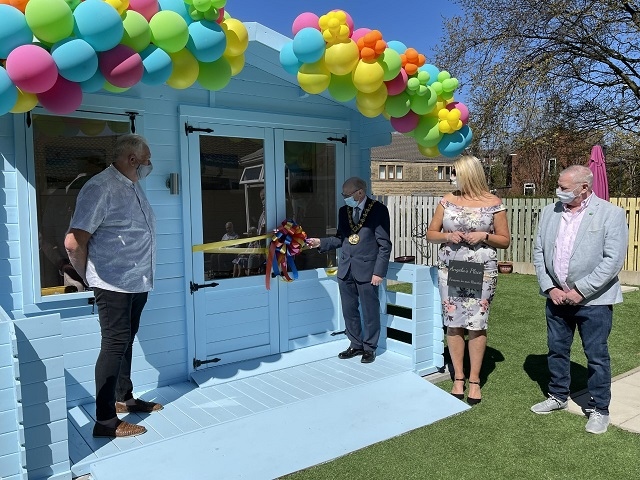 The summer house was funded by generous donations made by family and friends, in memory of the late Angela Bywater and The Willows

The Willows dementia hub held a grand opening of their new summer house on Thursday 22 April, with a ribbon cutting ceremony attended by Mayor Billy Sheerin.

The summer house was funded by generous donations made by family and friends, in memory of the late Angela Bywater.

Angela was a big part of The Willows family, regularly attending their comfort day service and also visiting their Woodlands café frequently with her husband, Malcolm. The support Angela and her family received from the comfort day service was invaluable, enabling Angela to remain living at home up until the end of her life.

Not only was The Willows able to support Angela, but it also offered social and emotional support to Malcolm, building a friendship that continues to thrive to this day. Sadly, Angela died on 19 January after a battle with dementia. Angela never let her diagnosis get her down and always had a beautiful smile for everyone. This was reiterated when her family set up a Just Giving page in her memory, asking for donations to The Willows, raising over £4,000.

The Willows team and Angela’s family decided these donations could be put to good use by building a summer house, to allow residents to spend quality time with family when visiting in a covid safe way, now affectionately known as ‘Angela’s Place’.

This plan became a reality and a small number of Angela’s family and friends, including her husband Malcolm, daughter Katie and brother Garry, met in the garden of The Willows for the grand unveiling.

The Willows’ Danielle Dutton said: “Thanks to Angela's family and Councillor Kathleen Nickson, who made a substantial donation of £2,000 towards the summer house, all of the Willows residents and their families are now able to enjoy this beautiful outside space. Thank you to everyone for all the support the Willows continues to receive.”