You are Here: Home » News » News Headlines » Hundreds of pounds worth of gardening equipment stolen in Whitworth

Hundreds of pounds worth of gardening equipment stolen in Whitworth 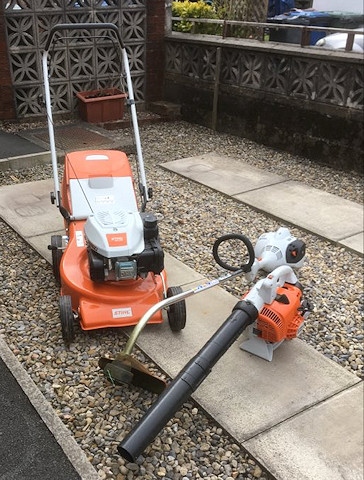 Some of the Stihl garden machinery stolen

Hundreds of pounds worth of gardening equipment has been stolen from Acre Street in Whitworth.

She said: “Two Stihl lawnmowers were taken, as well as a Stihl strimmer, Stihl leaf blower, and a set of petrol hedge trimmers. Unfortunately, at the time of the incident I had also hired a scarifier from Frank Key Tool Hire on Whitworth Road, so that was stolen too.

“I’m absolutely gutted. When you work hard it’s just awful when something like this happens.”

Travelling in a white Ford transit van the thieves gained access to Marilyn’s parked van sometime after 11pm via the side door, as the back door was padlocked.

The stolen tools cost a total of £915 to replace.

“We always unload machinery, but this one night we simply forgot,” added Marilyn.

“Fortunately, Frank Key had everything I needed to replace in stock, so it didn’t stop me working again on the Monday.

“If anyone saw or heard anything suspicious, please get in touch. I’ve asked neighbours on Acre Street who have CCTV and there doesn’t seem to have been any activity up or down the street, so I’m now thinking the thieves must have come along Longacres Drive.

“If anyone on Longacres has CCTV, could you please have a look to see if any vans are seen driving towards the top of Acre Street between 11pm and early morning on the night of Friday 16 April."

A spokesperson for Lancashire Police said: "No arrests have been made. Enquiries are ongoing."