You are Here: Home » News » News Headlines » Middleton woman who has been shielding since March 2020 meets animals at college after winning pig-naming competition 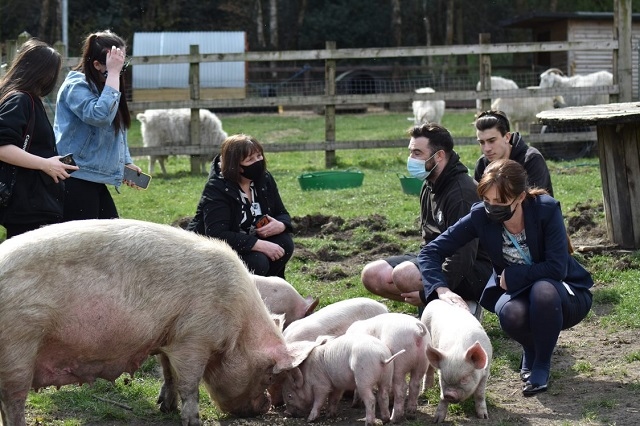 A local woman who has been shielding enjoyed her first day out in over a year after winning a competition held by Hopwood Hall College and University Centre.

Pauline Elliott – who battled skin cancer and says she’s been living like a ‘recluse’ – spent an afternoon surrounded by rare animals at the Middleton Campus.

The 55-year-old from Middleton was invited to explore the college’s vast wildlife enclosures after entering a contest to name one of the seven piglets homed there.

The runt of the litter has been a huge hit with students and it was decided that a member of the public should have the privilege of deciding its name.

Hundreds of people entered, but ultimately Pauline took the honour with her suggestion of ‘Tiny’.

The prize saw Pauline – accompanied by her daughter Holly and niece Candice - head to the college for her first day out since she started shielding in March 2020.

The trio were treated to an exclusive tour of the wildlife enclosures, which home over 700 species of animals that are tended to by learners studying Animal Management and Veterinary Nursing.

Just some of the exotic creatures that can be found there include meerkats, wallabies, armadillos and potoroos.

The grand finale saw Pauline actually get into the pigpen for a very special meet and greet with Tiny and her siblings.

She was thrilled and couldn’t wait to tell her four-year-old twin grandchildren, Harry and Hazel, who she recently saw for the first time since December 2019.

Pauline said: “It was an amazing experience. I’ve been telling everyone about it!

“I didn’t expect there to be so many endangered animals and the staff were so knowledgeable about every single of them.

“I’ve lived like a recluse for the past year so this really was such a lovely prize.”

Julia Heap, Principal and CEO of Hopwood Hall College and University Centre, said: “It was an absolute pleasure to invite Pauline and her family to campus so that they could meet the newly-named Tiny and all the other wonderful animals.

“We now know it’s been a very difficult few years for Pauline, so we are delighted that we were able to put a smile on her face.

“In future we look forward to offering other members of the community the same opportunity to experience these hidden treasures that are right on their doorstep!”