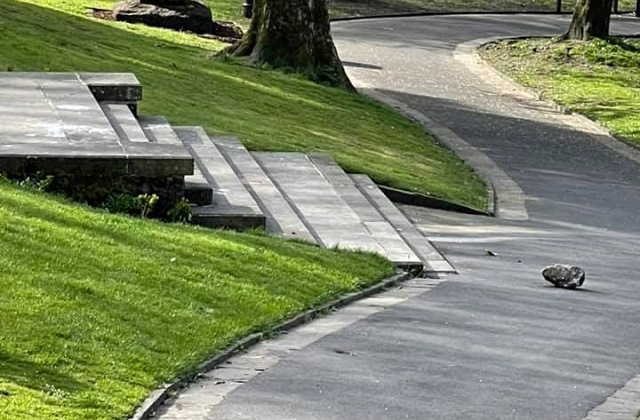 The Friends of Jubilee Park & Old Cemetery Middleton say the activity has been ongoing for a few weeks since lockdown lifted and has passed footage to the police.

In addition to the Exedra, which is a semicircular raised seat, damage has also been caused to the old burial ground next to St Leonard’s Church, in addition to fires being lit in the park.

Speaking on 26 April, a representative for the group said: “The feral youths that were in Jubilee Park most nights over the weekend have now caused more damage to the Grade-II listed Exedra and around the park, where various fires had been lit, causing damage.

“There is also damage in the old burial ground where some feel it’s appropriate to use gravestones as skateboard jumps or light a barbecue.

“We fully appreciate our new found freedoms after a long and lingering lockdown, but there is no excuse for this behaviour. Damage to the park and burial ground is not going to be tolerated and the footage has been given to the police.”

Damage to listed buildings is considered a heritage crime, which carries harsher sentencing due to the impact of damage or vandalism to national heritage assets.

The guidelines came into place in October 2019, and is the first time English and Welsh courts can take the damage caused into account during sentencing.

A spokesperson for Rochdale Borough Council said: "We are aware of the mindless damage to the steps and exedra at Jubilee Park in Middleton. Our youth service is working together with GMP, with additional discussions taking place with our conservation team to determine next steps."

The sandstone staircase leading to St Leonard’s Church was built in 1906 by internationally renowned architect J Edgar Wood, one of Middleton’s most famous sons and the creator of many of the stunning heritage buildings in the town.

The staircase and burial ground were restored in 2017 as part of the Middleton Townscape Heritage Initiative, which used a £1.9m grant to restore a number of the town’s historic buildings, with an emphasis on those designed by Wood.

The delicate work involved gently cleaning the whole structure, sourcing matching stone to repair the damaged steps and re-pointing all the stonework.

The original structure also featured a fountain, which, due to its small height, is thought to have been designed for children. The fountain was lost some years ago, but a carved stone commemorating Edgar Wood has now been placed where it once stood.

Twenty-one steps lead up to a semi-circular enclosure, which has seats and an inscription: "Who works not for his fellows his thoughts grow poor and dwindle and his heart grudges each beat as misers a dole."

The staircase and exedra was so famous when it was built that it featured on the cover of the 1906 edition of the prominent journal, Academy Architecture, which illustrated the most important designs exhibited at the Royal Academy each year.