You are Here: Home » News » News Headlines » Friends cycling from Rochdale to Liverpool whilst fasting for charity

Friends cycling from Rochdale to Liverpool whilst fasting for charity 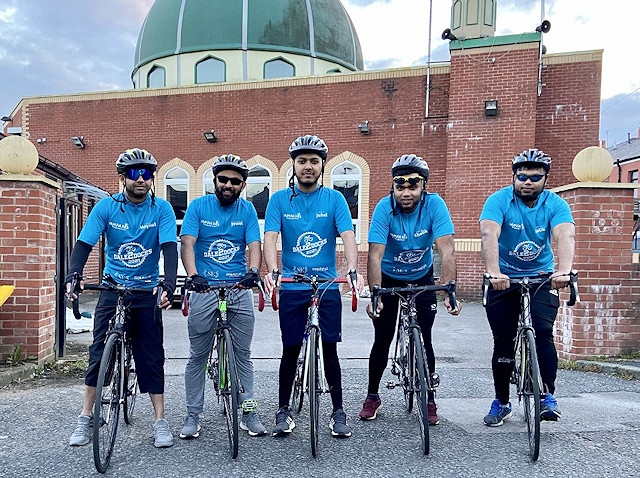 Five local men are cycling from Rochdale to Liverpool this Bank Holiday Monday (3 May) in an attempt to raise £2,500 for charity.

Not only will the men cycle an approximate 40 miles, but the real ‘Dale 2 Docks’ challenge will be that the men are fasting.

During the month of Ramadan, which runs from 12 April to 12 May this year, fasting Muslims do not eat or drink during daylight hours.

Human Aid UK volunteers Abdul Khalik, Jewel Choudhury, Moynul Haque, Juhel Miah and Salik Rahman, of Rochdale and Oldham, have set themselves the challenge to raise funds to build homes for widows and orphans in northern Syria during this month.

Each home will be fully furnished and cost just £2,500 each.

One of the young men participating, Salik Rahman said: “Year after year, we are used to seeing horrific images of tents and shelters in Syria being flooded with muddy water over the winter, leaving thousands of families homeless and at the mercy of the elements. Many displaced Syrians are currently moving throughout the region of Idlib, escaping from violence elsewhere in Syria. Since 2019, ongoing airstrikes in northern Syria have forced at least 1 million people to flee their homes.

“Our main priority is to raise as much money as possible to help as many families as possible, but I have never challenged myself like this ever before.

“The thought of cycling 40 miles without food or water is very scary, but it is nothing compared to the devastation that the Syrian people have had to endure during past 10 years of this conflict.”

The men are hoping to gain the support of the local community in raising funds for Human Aid UK, an international humanitarian charity which strives to alleviate the suffering of the oppressed.

The five men have currently raised half of their £2,500 target.

Further donations can be made via the link below: