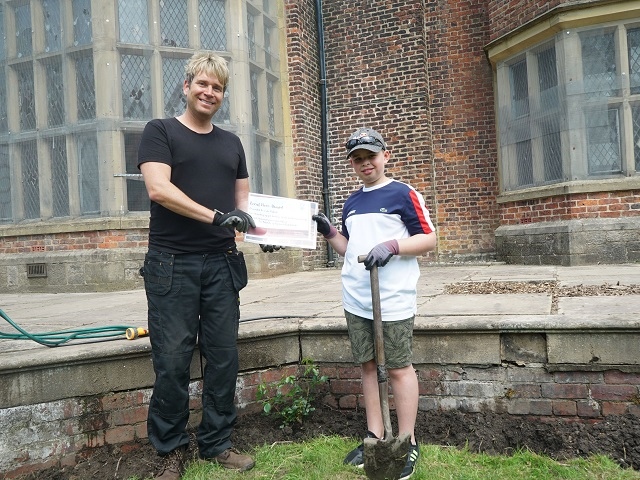 A local nine-year-old received a special certificate when visiting the Hopwood Hall estate after trying to stop irreplaceable flagstones being stolen from the St Mary in the Baum church.

Luke Pollock, nine, had left a heartfelt plea tied to the gates at his church following the thefts, asking for the thieves to leave the “precious” flagstones as the church did not have the money to replace them.

Following on from Luke’s bit to try to stop the thieving, Hopwood DePree – whose ancestral flagstones were also stolen from the rose garden at Hopwood Hall in November 2020 –  invited Luke to visit the hall on Tuesday (1 June), look around the gardens and be presented with a special ‘New Beginnings’ rose bush that was planted in the garden in his honour. 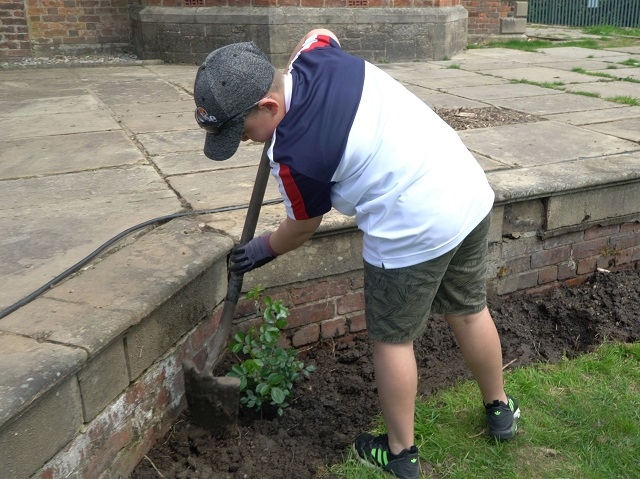 Luke arrived at the Hall with his father Matt Pollock and met Hopwood plus the Friends of Hopwood Hall Estate volunteers, and together they tended the gardens and chatted with Luke who watered the gardens with a new tap kindly provided by a grant from the Middleton Rotary Club.

As he arrived, Luke said he was excited to have been invited to the hall and was impressed: “I really like Hopwood Hall because I could see it through the trees. It’s incredible. And because of its age too; it’s incredible that it’s still standing today.”

Father Matt added: “I’m really taken aback by the building and the history as well as meeting such a wonderful group of volunteers who are passionate about what they do.”

Hopwood said of Luke’s visit: “I was delighted to finally meet Luke in person after hearing about his efforts to protect his local church St Mary in the Baum.

“He is an impressive young man and we can all take a lesson from him; his passion and support for heritage at such a young age is uplifting.

“We look forward to welcoming Luke to the Hall again and appreciate him taking an interest in being involved with its rescue.”

With the Covid-19 restrictions lifting, and Hopwood back in the UK after a stay in the USA (during the pandemic, US residents had been urged to return) – a date was able to be set for Luke’s visit which had been planned for some months.

The beautiful weather added to the happy occasion making it a very special day for the Hopwood Hall Estate renovation journey.

Indeed whilst Hopwood DePree has been in the USA, the work at Hopwood Hall continued via Zoom, phone calls and emails and with his team of personnel as 'boots on the ground', and an outpouring of support from the Friends of Hopwood Hall Estate which included removal of 30 years of scrub, debris and seeded trees from the rose garden. The lawn area was also kept under control with the help of sheep grazing.

The kitchen garden, previously largely impassable due to thorn bushes, balsam and weeds, has now been cleared, with the removal of moss revealing the beautiful Edgar Wood garden wall.

It’s hoped that the honey bees discovered last year will return so flower beds have been planted – donated by the Friends of Hopwood Hall Estate and other volunteers – to attract them and entice them back.

Inside the hall, heritage expert Bob Wall held workshops supported by a grant from Historic England to teach locals how to make leaded glass windows and replaced a large amount of them that had been lost or destroyed due to repeated past vandal attacks.

“It really is inspiring to see what a community can do when we all work together,” said Hopwood.