You are Here: Home » News » News Headlines » Rochdale Heartbeat and the Friends of Hopwood Park honoured with Queen's Award for Voluntary Service 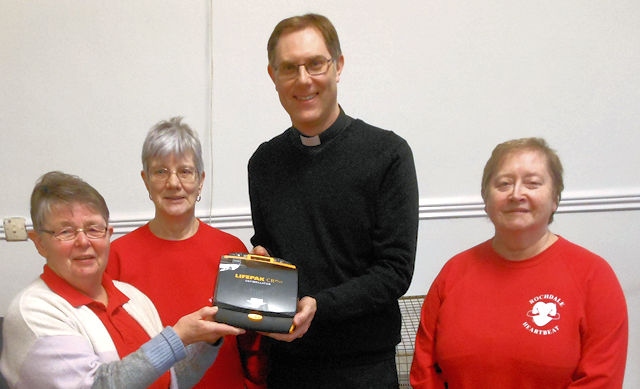 Voluntary groups Rochdale Heartbeat and the Friends of Hopwood Park have been honoured with a Queen's Award for Voluntary Service – the highest award a group can receive in the UK.

Rochdale Heartbeat provides a supported programme for heart patients after their discharge from NHS care (12 weeks post op) including a weekly gentle exercise programme, availability of professionals to discuss any worries and the opportunity to meet other patients who have undergone similar heart procedures.

It was founded in 1988 and became a charity in 1990, organising social evenings, healthy lifestyle events, relevant interesting speakers and fundraising events.

Since inception, Rochdale Heartbeat has raised over £350,000  and have donated various items of medical equipment to both Royal Oldham and Fairfield hospitals, as well as donating 42 defibrillators to sports venues, gyms, community halls and churches throughout the borough of Rochdale and surrounding area.

Outside the organised classes, support is offered to patients, whether they are still in hospital, attending out-patient clinics or back home in the community. This support is offered by a variety of people, including those who are medically qualified, those who have experienced heart complaints and their attendant problems and others, who in some way can offer relevant help and support.

Heartbeat also holds a fortnightly exercise and support group, which has had to be suspended due to Covid, and they visit the patients in the Silver Heart unit at Fairfield every week. This too has been put on hold for the time being.

A representative from Rochdale Heartbeat said: “We are delighted that the group's work to support the heart patients of Rochdale and beyond has been recognised.

“We thank each and every one of our volunteers and supporters for all their hard work, support and commitment.

Since 2011, The Friends of Hopwood Park has developed and implemented ambitious plans to enhance and open up the facilities for the local community. Ongoing drainage problems which resulted in flooding have been addressed with the creation of a large wildlife pond.

Paths have been laid with tarmac and flower beds, planters and a wild flower meadow have been installed along with an orchard. There is a playground with apparatus and a zip-wire.

In partnership with the adjacent primary school a secure all-weather playground has been installed, used by the school in school hours but which reverts to community use after 4pm.

An ice-cream and soft drinks cabin was installed which has now been enhanced by a larger cafe after securing funding of £70,000 to turn a derelict bus shelter into a modern facility.

Picnic tables and outdoor seating are available and plans are being finalised for a terraced seating area overlooking the bowling green.

Sandra Trickett, chair of the Friends of Hopwood Park, said: “We are extremely proud to receive this award. I am delighted that our hard work has been recognised and I would like to sincerely thank each and every volunteer who has been involved in our journey over the last 10 years to make this outstanding achievement possible

“We have also been awarded an additional special designation for providing impactful support to our community during the Covid-19 pandemic in 2020 and six of our volunteers will receive a special award to recognise their efforts.”

Commonly known as the MBE for volunteer groups, the Queen's Award for Voluntary Service aims to recognise outstanding work by volunteer groups to benefit their local communities. It was created in 2002 to celebrate the Queen's Golden Jubilee. Recipients are announced each year on 2 June, the anniversary of the Queen's Coronation.

The Greater Manchester award winners will receive their award later in the summer from the Lord-Lieutenant and two members of each group will attend a garden party at Buckingham Palace in 2022.

The Lord-Lieutenant said: “This award recognises the contribution an organisation makes within its community. It is a rare honour. It is not won easily and it recognises real achievement, effort, and a major contribution to the community.

“The last 16 months have highlighted just how valuable volunteering is to the country, with groups innovatively continuing their valuable work in the community, despite the restrictions and threat of the virus and I hope many more will be nominated in the future.”

Any group of two or more people that has participated in voluntary work for more than three years can be nominated for the award.

Full details on how to nominate are available at https://qavs.culture.gov.uk