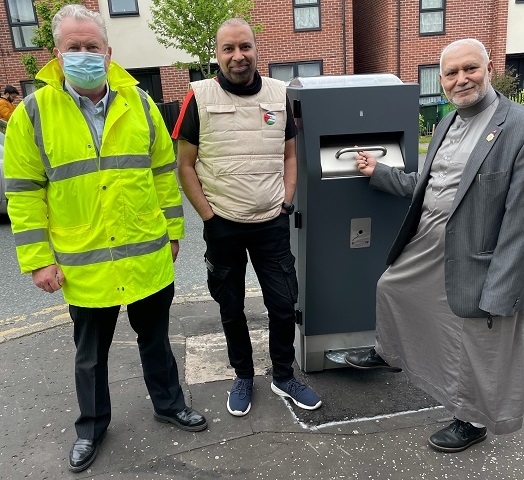 One of the bins in Milkstone and Deeplish

Two more solar-powered bins have been installed in Milkstone and Deeplish to reduce litter, decrease the frequency of waste collections and help reduce greenhouse gas emissions.

Ten solar-powered bins were first installed at Hollingworth Lake in the borough earlier this year.

Following the installation of two Mr.FILL bins at the lake, eight additional bins by a different supplier, Big Belly, were later introduced.

The Big Belly bins are coming to the end of their trial period at the lake, when they will be removed and replaced with standard bins again for the time being.

The council is considering whether to trial the bins at an alternate location, but the two Mr.FILL bins will stay in place.

The two being trialled at Milkstone and Deeplish are from a third supplier, British Bins.

A spokesperson for the council said: “The key benefits we are hoping to realise from these bins is less journeys, leading to lower emissions and thus helping us achieve our carbon reduction/climate change ambitions and reduced operative time spent emptying bins, which will free staff up for other cleansing tasks such as litter picking.”

The bins run on solar energy: a sensor continuously measures the fill level of waste and triggers when compaction is required. The waste inside is then squashed to around 70% less volume - allowing more room and fewer empties than standard litter bins.

The sensor, which uses laser technology, scans the contents of the bin and sends a handy alert via reporting software when the bin is ready for emptying – it can even detect blockages or fires.

Once at full capacity, the bin chute will automatically lock to stop excess litter spilling out onto the floor.