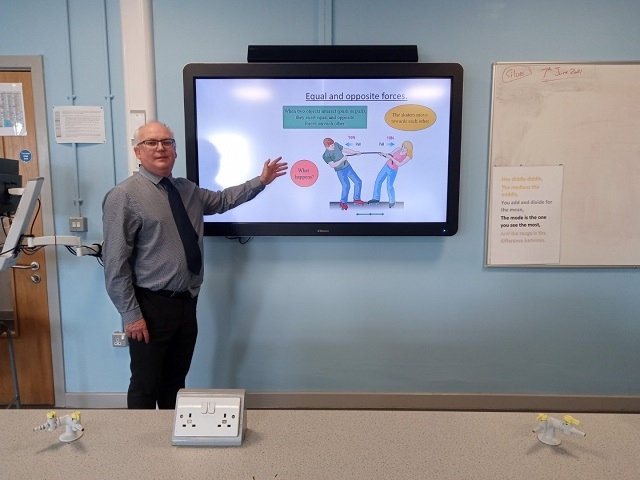 Supported by the DfE-funded Transition to Teach initiative, Jamie Curley, 55, is using his experience as territory manager in the medical devices industry and as a volunteer to teach science

A Rochdale volunteer with the Greater Manchester Army Cadet Force has become a teacher to make a difference in young people’s lives.

Supported by the DfE-funded Transition to Teach initiative, Jamie Curley, 55, is using his experience as territory manager in the medical devices industry and as a volunteer to teach science.

Jamie, who has a degree in biology and a doctorate in engineering, completed his PGCE to become a science teacher before starting his Newly Qualified Teacher (NQT) year at a school in Rochdale in September 2020.

He said: “I’d volunteered with Greater Manchester Army Cadet Force and working with young people, investing time, showed me what a difference a teacher could make to their lives. There was immense satisfaction in it.

“I was 53 when I discovered Transition to Teach and decided to train as a science teacher, an age when some teachers are starting to move out of the profession. My first two questions to Transition to Teach were: ‘am I too old’ and ‘is it too late to apply to teach this year’ and they said no on both counts. Six weeks later I was on the PGCE course at Manchester Metropolitan University.

Jamie believes the transferable skills he developed in his past career and as a volunteer with the Greater Manchester Army Cadet Force help in his new teaching career: “I think self-confidence really helps as a teacher and all of the presentations I had to make in my old job really helped with that side of things. It was a transferable skill I could bring with me to the classroom.

“I’ve never looked back. I’m in a really great school with three other NQTs and I can’t praise my school enough. From day one, I was part of the team. Even though some people hold senior positions, there are no airs and graces, everyone in the school is really supportive.”

Jamie continued: “Transition to Teach has supported me right through my PGCE year and that support will continue through to the end of my first year as a NQT, which will be at the end of July 2021. I talked with my Guidance and Development Adviser about my Army Cadet Force experience and how I could transfer those skills into teaching. I was given support to get onto my PGCE, help with applying for a bursary and the knowledge that there’s always someone there to help with any questions or worries.

“My school is about to launch three new academies within the school, construction, dance and Cadets and I’ve been asked to be the head of the Cadets Academy and will attend RAF Cranwell over the summer to do the senior officer’s course. We’re working alongside the local squadron. 30 students will follow the Cadets syllabus in a two year programme, giving our students opportunities that they wouldn’t usually have had, like going flying and shooting.

“Some schools already have a Combined Cadet Force (CCF) and the government is investing £1 million to help schools introduce more of them. For a young person that has maybe started along the wrong path, an opportunity like the Cadets Academy could make the difference for them. Introducing them to responsibility and learning how to model the right behaviour to other people. I was happy as Larry being a science teacher, and then this fantastic opportunity came my way too. I must have done something right.”

He added: “The wider world perspective is also key. If you can make what you’re teaching relevant to your students and relate it to the real world, then you’re more likely to engage them.

“I say to people that teaching isn’t a job, it’s a way of life. The lessons are part of it, but only part of it, there’s also the pastoral side. It sounds corny but the best thing about teaching is knowing that I’m making a difference. When it goes wrong in a young person’s life, it can take a lifetime to put it right.

“If you want to create the right society, it starts with education.”

Transition to Teach, based in Manchester, is encouraging more participants to train as teachers in STEM subjects, helping to drive recruitment for subjects such as physics, maths and chemistry.

The programme supports those at risk of redundancy, early retirees and eligible career changers into teaching, with 69% of Transition to Teach participants in 2020 training to teach a STEM subject such as science, maths or computer science, up from 37% in 2019.

Applications are now open for September 2021: