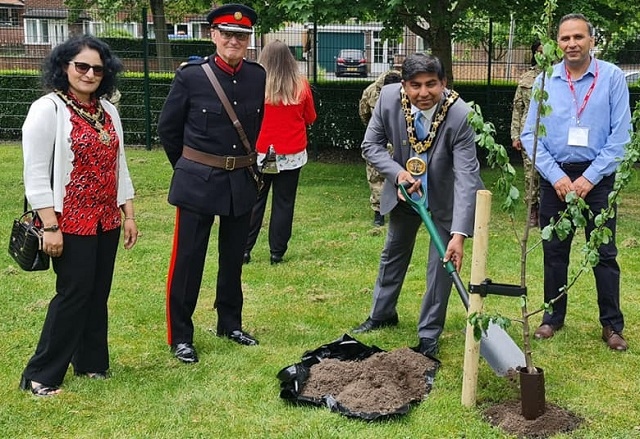 In attendance at Kingsway were the Mayoress of Rochdale, Deputy Lieutenant Ian Sandiford, Mayor of Rochdale and ward councillor Shakil Ahmed

A tree has been planted at Kingsway Park High School to celebrate the memory and living legacy of the Duke of Edinburgh.

The tree planting was one of 11 throughout Greater Manchester held on 10 June 2021, the anniversary of the late Duke’s birthday, to celebrate the legacy of his Duke of Edinburgh Award (DofE).

All 11 trees, donated by City of Trees, were planted by young DofE participants, and 65 bluebell seeds scattered at the base of each tree to represent 65 years of The Duke of Edinburgh’s Award.

Helen Foster, the DofE Director for the North, said: “Young people are facing the toughest challenges, to their mental health and future prospects, and the DofE has never been more needed.

“By celebrating our founder’s birthday and HRH’s exceptional legacy we celebrate the amazing achievements of every young person who is doing or done their DofE. I thank every organisation that has contributed to young people’s success and look forward to working in partnership to realise our new strategic ambition – to give one million more young people the opportunity to do their DofE in the UK by 2026.

“I’d also like to say a massive thank you to Sir Warren Smith, Lord Lieutenant of Greater Manchester for his generous support of young people and continued commitment to the DofE.”

The Lord Lieutenant said: “The Greater Manchester Lieutenancy are very pleased to be able to support this important initiative for young people. For over 60 years The Duke of Edinburgh’s Award scheme has created a unique opportunity for young people to enhance themselves and gain self-confidence in a way that will support them for the rest of their lives.”

A further 1,200 trees will be planted later in the year to celebrate the life of the Duke.