You are Here: Home » News » News Headlines » Jade Kilduff to take to the skies this weekend for charity wing walk 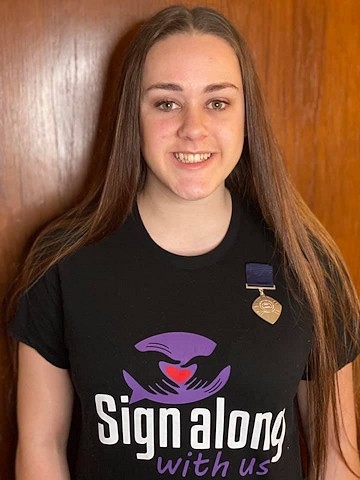 Jade Kilduff will take to the skies this Saturday (19 June) for her long-awaited wing walk for charity.

Jade, of Heywood, was originally due to wing walk in April last year, but this was postponed because of the pandemic.

Read more: 'Sign Along With Us's Jade Kilduff to wing walk whilst signing for charityPublished: 29 September 2019

Jade started Sign Along With Us in 2019, teaching Makaton sign language so she could communicate with her younger brother, Christian. Jade began offering free signing classes to other local children and their families, to improve the lives of those with disabilities, and the Sign Along With Us choir was born.

She will be signing whilst flying through the sky.

To date, Jade has raised over £1,700 for Peeps HIE, a charity which supports those affected by HIE (hypoxic-ischaemic encephalopathy), a lack of oxygen to the brain before, during, or shortly after labour.

HIE can cause injury, and the severity of this can vary greatly, says the charity, often given a grade from 1, which is mild, to 3, which is severe.

Speaking when she first announced her wing walk, Jade said: “Peeps-Hie is the charity that Christian and I are proudly ambassadors for, they bring vital support to families whose children like Christian have suffered a HIE brain injury.

“Christian had a HIE event after needing 24 minutes of resuscitation when he was stillborn at birth. This led to him being sight impaired and being diagnosed with Quad Cerebral Palsy. This charity is so close to our hearts and we are very passionate about helping them in any way we can.

“When Christian came to live with our family from hospital at five-weeks-old, we were told he had a grade 3 HIE injury. We had no idea what that was and what that could lead to and knew nobody else who had experience or could help us.

“Peeps are changing that by providing families whose child has an HIE event with information packs and, more importantly, supporting families from the start and being there throughout their journey, whatever the outcomes are.”

She added: “I am petrified as I’m scared of flying inside a plane – never mind standing on top! – although I am excited to raise lots of money for this amazing charity.”