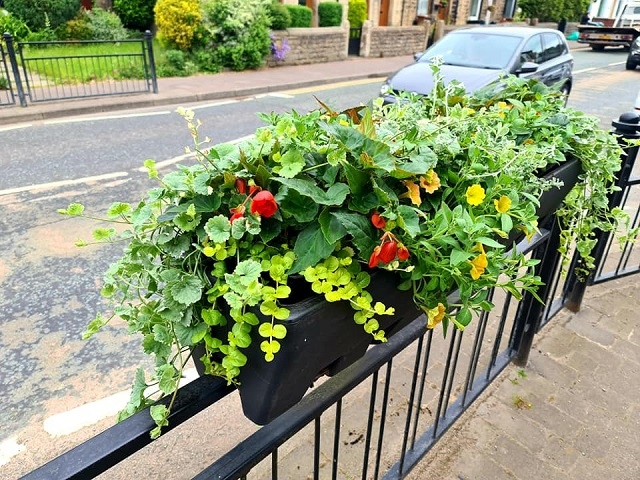 The Norden Environmental and Economic Village Association has become the first community group to adopt the council’s saddle planters in Norden.

The planters are usually maintained by the council, but six in Norden will be looked after by volunteers until the end of 2021, contributing to this year’s In Bloom efforts. The six containers have been planted up with a large variety of drought-resistant bedding plants and non-stop begonias.

The move is a new initiative between Rochdale in Bloom and Norden Environmental and Economic Village Association ahead of this year’s Royal Horticultural Society (RHS) North West in Bloom competition, which aims to encourage local communities to improve and care for their local environment.

The community project has been sponsored by Michael Nelson, of Marl Pits Garden Centre, who has supported a number of Norden projects over the years including the village shops’ external Christmas trees and the plants forming the Royal British Legion display at the Norden war memorial.

Additionally, the Norden rockery has this year been sponsored by Angela Collinge of Amber Pets, at the Cutgate precinct.

The rich and vivid rockery has featured on the judging route for the last four years and has been given an overhaul with 30 geraniums of the Rozanne variety. As they grow, the blooms will provide a sea of blue-purple flowers with white centres.

The striking rockery was created in 2017 on a bland triangle of grass at the junction of Elmsfield Avenue and Edenfield Road, where the traffic island had stood unaltered for years.

Paul Ellison, chairman of NEEVA and vice-chair of Rochdale in Bloom, said: "We do take pride in our village, from the colourful saddle planters to the patriotic bunting in support of the football. So many have said these things brind a smile to their face when they drive through. A big thanks goes to Angela and Michael; we couldn't do it without them and I'm very thankful for their support."

North West in Bloom judges will pass through Rochdale and Norden in early August.