Councillor goes on police walkabout to take up crime complaints 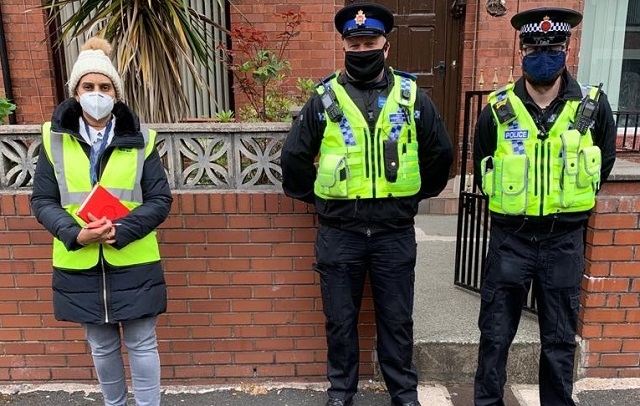 Spotland and Falinge councillor Iram Faisal has been out on the beat with the police to highlight crime and anti-social problems in her ward.

Councillor Faisal said: "Speeding cars, vandalism and anti-social problems are the most common issues residents contact me about. I was delighted when the local beat officers agreed to join me on a walkabout in the ward and to visit residents to find out first hand some of the problems going on.

"Crime in Spotland and Falinge is probably no worse than anywhere else, but residents want to see a visible presence by the police and that their concerns are being taken up and dealt with.

"Most residents were quite surprised when the police and myself knocked on their door. They explained all their concerns and the police noted down everything giving their contact details and reassuring residents that they are in the area every day. This was the first time I have gone out with the police and it was a eye opener. They really have gone the extra mile and it was a job well done. Sometimes just listening to people provides reassurance to the public."

PC Phil Jones said: "PCSO Robinson and myself have a good working relationship with our councillors and it was great to be able to have a walk around our beat with Councillor Iram Faisal.

"We discussed some of the persistent issues affecting the area and spoke to residents to listen to their concerns.

"We will be looking at the reported issues together to see what action and improvements can be made."