You are Here: Home » News » News Headlines » Borough invited to clap back at the racists and show support for England football team after Euro 2020 final 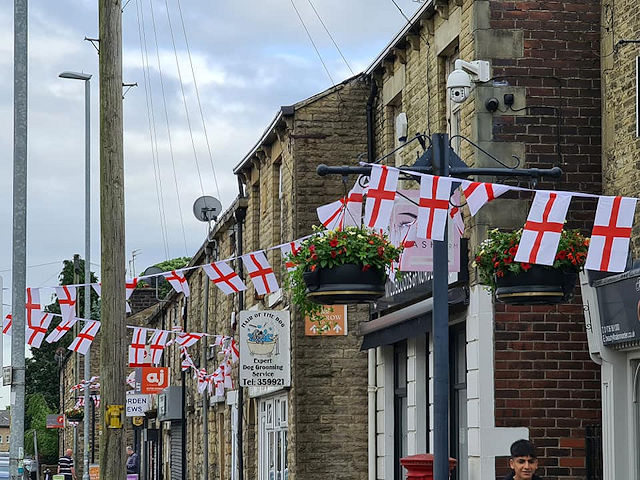 The England flag bunting in Norden

Local residents are invited to take part in a national ‘clap for the England football team’ this Sunday (18 July) as a tribute for their efforts throughout the Euro 2020 tournament.

As a tribute and massive thank you for the footballers’ hard work, camaraderie and commitment throughout the Euros – which saw the men’s team reach their first major tournament final in 55 years – borough residents are asked to recognise the achievement by clapping at 6pm.

Despite a strong start to the game with an early goal, England were unfortunately beaten by Italy on Sunday, as the tense 1-1 game came down to penalties. The match was England’s first final in a major tournament since winning the 1966 World Cup.

Additionally, the bunting depicting the England flag will grace Norden village for a few more weeks, a welcome and positive sight following the racist abuse targeted towards three of England’s players who missed penalty kicks.

Paul Ellison and Joanna Flanagan, who are organising the clap, said: “We want the nation to recognise what the England team together with their manager Gareth Southgate, have achieved for this country.

“To reach the final of such a huge tournament is an achievement that each and every one of the players and their team colleagues should be proud of.

“After a difficult 18 months, they have united our nation and pulled together even those who weren’t particularly interested in the game.

“Nail-biting performances throughout the tournament and despite the negativity floating around at the moment, we want to recognise their skills, their endurance and above all the dignity they have shown.

“Thank you to Gareth Southgate and the England football team.”

Marcus Rashford, Jadon Sancho and Bukayo Saka each missed penalties in the 3-2 shootout loss and have since been targeted on social media. A number of messages used the n-word – seemingly causing the slur to trend – whilst others compared the players to monkeys, or used emojis associated with racist slurs.

A mural honouring Rashford in Withington was also defaced with graffiti shortly after England’s loss, but has since been covered with hundreds of messages of support and subsequently repainted by the artist.

Greater Manchester Mayor Andy Burnham described the mural defacement as a "despicable, shameful act", tweeting: "We could not be more proud of Marcus Rashford and his role in taking our country to its first major final in 55 years.”

European football's governing body UEFA has condemned the "disgusting racist abuse" adding: “This has no place in football or society. We stand by the players and the English FA’s call for the strongest possible punishments.”

The FA has since called for social media companies – which aren’t regulated in the same way as traditional publishers or broadcasters – to 'step up and take action'.

In a statement, the FA said: “We strongly condemn all forms of discrimination and are appalled by the online racism that has been aimed at some of our England players on social media.

“We could not be clearer that anyone behind such disgusting behaviour is not welcome in following the team.

“We will do all we can to support the players affected while urging the toughest punishments possible for anyone responsible.

“We will continue to do everything we can to stamp discrimination out of the game, but we implore government to act quickly and bring in the appropriate legislation so this abuse has real life consequences.

“Social media companies need to step up and take accountability and action to ban abusers from their platforms, gather evidence that can lead to prosecution and support making the platforms free from this type of abhorrent abuse.”