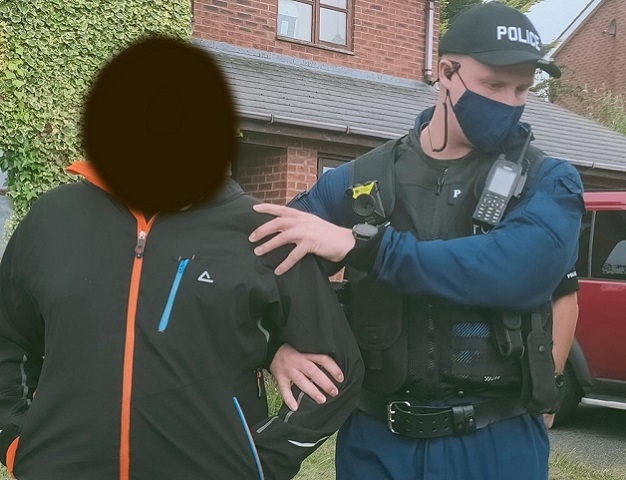 A suspect was arrested in Rochdale

Police have arrested a Rochdale man and seized half-a-million pounds in cash Thursday morning (15 July) after executing a series of warrants as part of an investigation into a suspected multi-million pound cannabis enterprise.

Officers from GMP Rochdale's Challenger team, alongside support from the Tactical Aid Unit and North Wales Police, saw raids at two addresses in Rochdale and a property in the Holywell area of Wales.

A 46-year-old man was taken to custody after being arrested on suspicion of money laundering and being concerned in the supply of class B drugs.

The action follows the execution of drug warrants in May at two properties in Rochdale, where cannabis and over £80,000 in cash was recovered.

Subsequent enquiries suggested the sites are linked to an illicit enterprise worth an estimated £6million a year.

An investigation was launched by GMP Rochdale's Complex Safeguarding team, with the aim being to target and arrest offenders.

Detective Inspector Sam Taylor, of GMP Rochdale's CID, said: "Since May's raids where we recovered a significant amount of cash and drugs, we have worked fiercely to find those involved in this illicit enterprise and take them into custody.

"These drugs cause psychological and physical harm as well as societal damage, and we are intent on catching those we suspect of being offenders.

"We are really keen to ensure that anyone with suspicions or concerns about the supply of drugs in their area, come forward to police and tell us in confidence so we can continue to take this kind of action."

Anyone with information or concerns can contact police online, if able, via www.gmp.police.uk or call 101. Details can be passed anonymously to the independent charity Crimestoppers on 0800 555 111.