You are Here: Home » News » News Headlines » Duo to cycle from Wolverhampton to Wigan for Springhill Hospice in memory of late grandfather who completed similar ride 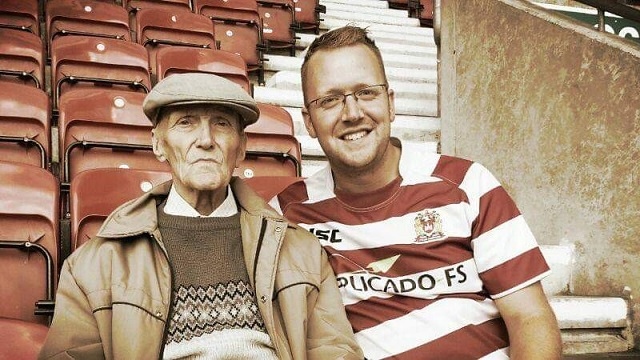 Two local men are cycling from Wolverhampton to Wigan in memory of Albert Liptrot – who carried out a similar journey before settling in Rochdale – for Springhill Hospice today (Saturday 17 July).

Albert’s grandson, Tim, will be joined by Andrew Duxbury for the challenge, a fitting tribute as the late Albert, who would have been 100 this year, and his brother rode a similar journey from Wigan to Wolverhampton during the 1940s in search of work.

“Were he still with us, Grandad wouldn’t have wanted any fuss,” Tim explained. “He would have preferred a donation to the hospice to any gifts, so I wanted to do a fitting fundraiser in tribute to an amazing man.”

Albert was born in Wigan in 1921. With a scarce job market, Albert and his brother rode from Wigan to Wolverhampton on a tandem bicycle in the hope of finding work. Albert was sold the tandem on the promise it could do 60mph and the brothers would be there in no time. Needless to say, that was not the case.

After securing a job for himself, Albert and his brother had to return home to tell their father the good news. Unable to face the return journey, they gave the bike to a lorry driver in exchange for a lift home.

After securing a job with Craddocks shoes, which was taken over by Clarks, Albert briefly relocated to Stoke-on-Trent before moving to Rochdale with his family. Albert managed the Clarks store for years, first when it was on Yorkshire Street and then at what is now the O2 shop in the Rochdale Exchange.

Albert retired in 1986 when Tim was born, to help look after him, and died aged 93 in October 2014. Although Albert himself never required the support of the hospice, he had many friends who did and spoke passionately about their work.

Tim continued: “Grandad felt immensely proud of the life he had in Rochdale and was proud of the work that Springhill did. He always felt the Springhill Hospice charity exemplified the attitudes and cooperation of the Rochdale community.

“He was proud of his work and the career he had with Clarks and enjoyed his life in Rochdale.  I was always blown away (though not surprised) by the number of people who knew him and the respect always shown to him. He certainly earnt that.

“Grandad was extremely proud to be from Wigan and always spoke with passion about his upbringing in Orrell, reminiscing about his childhood around there and Upholland. He followed Wigan rugby, a passion he passed on to me and something we watched together for the rest of his life.

“I thought it would be a fitting tribute to emulate his ride going from the ground of Wigan Rugby League to Molineux, home of Wolverhampton Wanderers, in order to raise vital funds for the hospice.

“If you can help this wonderful charity by donating any amount, you will be making an incredible difference supporting them to provide the best end of life care and support for local people and their families.

“I know that Grandad would be proud and grateful for each and every donation made in his memory.”