You are Here: Home » News » News Headlines » This very rare medical condition hasn't stopped Rachel Winnard from living life to the full, despite the pandemic

This very rare medical condition hasn't stopped Rachel Winnard from living life to the full, despite the pandemic 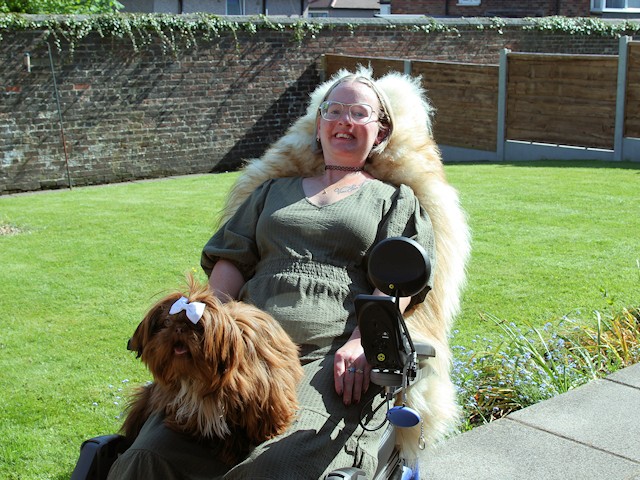 Rachel Winnard with her dog, Mabel

Local woman Rachel Winnard has refused to let the pandemic and resulting lockdowns get the better of her over the last year, despite suffering from a very rare medical condition which causes bone to form in her body’s muscles and connective tissues.

Rachel, 36, of Rochdale, was born with Fibrodysplasia Ossificans Progressiva (FOP) – a very rare genetic disorder or mutation which affects approximately one in two million people.

Because of an error in the body’s repair mechanism, simple bumps, bruises, and intra-muscular trauma like injections can turn muscles, tendons and ligaments into new bone – identical to existing bones, but in the wrong place.

When the body starts to generate new bone, a painful flare-up is usually experienced, which can be accompanied by tissue swelling, joint stiffness and serious discomfort. Episodes of bone growth can also occur spontaneously.

And whilst the pandemic and lockdowns could have taken their toll on Rachel, she has refused to become a victim. Indeed, she became one of the first FOP patients to have a Covid-19 vaccination, despite the associated risks. The risks associated with the vaccine for people with FOP mean the decision to take it must be assessed on a case-by-case basis.

Rachel has always managed to work around her illness and remain as independent as possible – despite experiencing restricted mobility in her left hip and left arm, and being unable to wear flat shoes, she has always adapted as needed.

Even experiencing a flare-up after a fall didn’t stop her – Rachel thought she had broken her pelvis which could have proved disastrous – and she moved into a new bungalow with her mum and aunt three days before Christmas last year.

The fall left Rachel bedridden for months, but she was still determined to make the most of the outdoors and exercise during lockdown.

She said: “I was in agony. The hardest thing about FOP has been losing my mobility, so it was difficult being bedridden for so long.

“Lockdown didn’t make too much of a difference for me. I’ve tried to get out where I can, going for walks with my mum and aunt in Falinge Park. It’s been lovely and quiet so I was easily able to abide by the distancing rules.”

Rachel’s independence has also been kept alight after acquiring her dog, Mabel, in December, and receiving her Covid-19 vaccinations mean she is already making plans to go on holiday before her illness means she is unable to travel.

FOP affects approximately 60-80 people across the UK, and the gene responsible was only discovered 15 years ago.

Due to lumps and bumps on her back, Rachel was originally diagnosed with aggressive juvenile fibromatosis, and treated with chemo- and radiotherapy. When she was 12, doctors realised Rachel was missing a bone in each of her big toes – a classic ‘tell-tale’ sign of FOP – which led to her diagnosis.

Rather than disappearing, the tumours were turning into bone, meaning Rachel was essentially growing a second skeleton.

FOP itself as a condition has been described as far back as the seventeenth century, and was renamed in 1970. The best known case of FOP is that of Harry Eastlack, whose skeleton is on display in a museum in Philadelphia. Harry died just days before his 40th birthday, able to move only his lips.

There is no definitive treatment or cure available for patients with FOP, which is why Rachel has helped raise awareness of her condition for years. She even featured in Cosmopolitan magazine in 2010 and the national Express newspaper, telling her story as well as hosting fundraising events.

But treatment for FOP could soon change: earlier this year a submission was made to the US Food and Drug Administration for the world’s first potential FOP treatment.

In May 2021, an application for a new drug to prevent new bone formation -  palovarotene - was accepted by the US Food and Drug Administration from pharmaceutical company Ipsen.

The application for palovarotene is primarily based on data from an ongoing trial in FOP patients. Patients taking the drug have shown, on average, a 62% reduction in the formation of new bone compared to those who did not receive the treatment.

Dr. Howard Mayer, Executive Vice President and Head of Research and Development, Ipsen, said: “With no approved treatments for this progressive and debilitating disease, there remains a great unmet medical need for the FOP community.

“This year marks 15 years since the discovery of the mutation in the gene ALK2/ACVR1 which causes FOP, and the palovarotene submission is the first worldwide for a potential treatment in this disease.

“Our teams at Ipsen are now focused on working closely with regulatory authorities to bring this potential treatment option to people living with FOP around the world.

“We want to thank all the people living with FOP, their families, caregivers and healthcare teams who have participated in the palovarotene clinical program.”

Read our exclusive Real Rochdale with Rachel here (accessible version here) – or pick up a free copy from selected retailers.