You are Here: Home » News » News Headlines » Two years since a local climate emergency was declared

Two years since a local climate emergency was declared 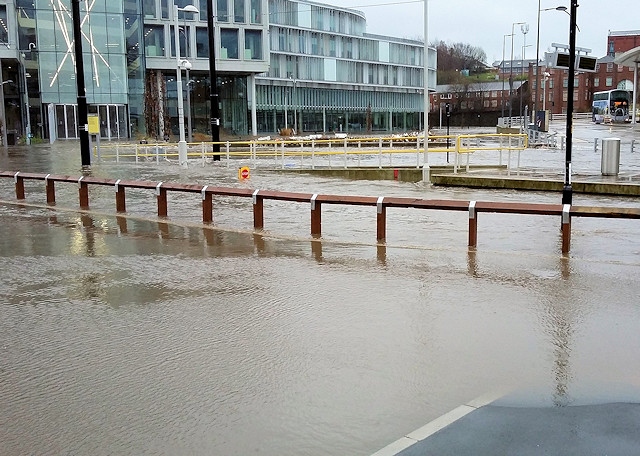 Rochdale during the Boxing Day 2015 floods

It has been two years since Rochdale Council declared a climate emergency, recognising that urgent action is needed if global warming is to be kept to a maximum of 1.5°C.

On 17 July 2019, councillors voted almost unanimously in favour of commitment to making the borough carbon-neutral – removing the same amount of carbon dioxide from the environment as it releases into it – by 2038, twelve years earlier than the target set by the government.

To mark the occasion, members of Rochdale’s Extinction Rebellion group will be presenting a special anniversary card to the council on Saturday 17 July 2021.

The card has an image of the Number One Riverside Council Offices surrounded by the 2015 floods, the most calamitous flood in Rochdale's history after a month’s rainfall fell in just a few hours.

A review of the 2015/16 winter floods in the UK by the Centre for Ecology and Hydrology said that a ‘real-time’ attribution study presented after the December 2015 flooding claimed the rainfall was made 40% more likely as a result of climate change resulting from human activity.

Since the Boxing Day Floods, certain areas of the borough are prone to flooding whenever heavy rainfall occurs.

Group co-ordinator Jane Touil said: “To mark this occasion, we have made a giant anniversary card and filled it with messages from residents of the borough.

“We have gone onto the streets and asked people what they want to say to the council about the climate and nature emergency.

“They have shared their hopes, fears, suggestions, feedback, demands and questions. We hope this will spur the council into taking the urgent action needed to protect the people.”

Another member of the group, Rev Mark Coleman, retired Vicar of Rochdale, said: “We elect our councillors and MPs to keep us safe and make sure that society runs well and fairly.

“I don’t see evidence of significant action by the local authority to cut the emissions that are heating the climate.

“On the contrary there are new developments - roads, housing, industry - that will bring more emissions and increase the risk of flood here, and drought and extreme temperature elsewhere.”

Responding, Councillor Sara Rowbotham MBE, the council’s cabinet member for climate change and responsibility said: “Our climate change targets are ambitious because we know that without radical action we are not going to make a difference.

“Extinction Rebellion are right to hold organisations to account and I want to reassure them that we are doing everything we can to play a significant part in the response to this global emergency. We have already taken huge steps towards reducing our carbon footprint and we have many more things are that are being worked on. These include community energy programmes, more solar farms, decarbonisation schemes, planning initiatives, training for council officers and more help for residents.

“As the lead for this area I am meeting with local Extinction Rebellion representatives to go through our plans in greater detail and listening to their views.”

A UN report has also warned that the risk of catastrophic climate change – including extreme heat, drought and flooding – would significantly increase if temperatures rise beyond this point, adding that we could have just a few years left to limit a climate change catastrophe.

Speaking at the meeting two years ago, Liberal Democrat leader Councillor Andy Kelly called on his fellow councillors to recognise the urgency of the situation: “Climate change is real, whether we like it or not.

“We are in a state of emergency – sea levels are rising, temperatures are rising across the globe, pollution is the highest it has ever been.”

He added that while climate change may be a global issue, its effects were already in evidence much closer to home: “It affects us locally with air quality, with the flooding issues we see time and again in this borough and it’s certainly going to affect our children and grandchildren – and those children not yet born.

The Lib Dem leader said that by declaring a climate emergency the council would give itself a platform to develop green policies.

“Declaring a climate change emergency gives us a chance to promote the elimination of single use plastics, to invest in a better transport system, to reinvest in planting trees – improving air quality, biodiversity and improving the natural heritage of the borough.

“Every new house we can ensure is of the greenest standard, some very practical things we can get behind as a council – ensuring every new house has electric car points.

“All these things we can do, not just to reduce pollution but ensure a long-term sustainability for the borough.”