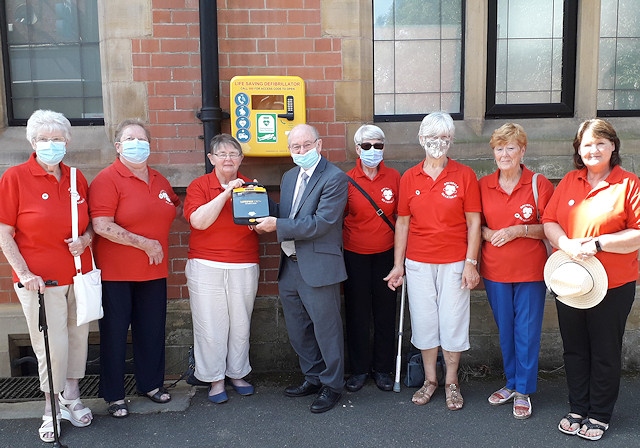 The centre of Castleton has received a new defibrillator (Tuesday 20 July), thanks to voluntary group Rochdale Heartbeat.

The lifesaving equipment donated by the group has been mounted in a cabinet on the external wall of the Carnegie Building (old Castleton Library) – one of the busiest areas in Castleton – with permission of Gary Ellis from Crewe Industrial, who owns the site.

The new defibrillator takes the total number of defibrillators in Castleton up to three, however this is the first defibrillator that can be accessed by the public 24/7. The others – found at Castleton Community Centre and Castleton Health and Leisure Centre – are only available when the centres are open.

Access to the defibrillator is gained by dialling 999 and informing the operator of the postcode which is on the front of the casing, then punching in the code to open the door. This will be a life saver for anyone close by who suffers a cardiac arrest.

Councillor Billy Sheerin accepted the new defibrillator on behalf of the residents of Castleton.

Councillor Sheerin, who served as the Mayor of Rochdale from 2019-2021, said: “During my first year of office as the mayor, I attended a fundraising event in support of Heartbeat. I was amazed to find out that the group had been in existence since 1988 and had raised enough funds over the years to supply 42 defibrillators. These have been installed all over the borough of Rochdale, in many varied establishments.

“At the event, I had a conversation with secretary of the group, Sue Ridgard, and expressed my desire to have a defibrillator installed in Castleton that could be accessed by anyone in need 24/7, close to the village centre.

“Thanks to donations from Castleton Timber and Ian Gilbertson’s JustGiving page on social media, funding for special outdoor casing was well achieved!

“All additional money raised over what was needed will be given to Rochdale Heartbeat for them to carry on their amazing work.”

Rochdale Heartbeat provides a supported programme for heart patients after their discharge from NHS care (12 weeks post op) including a weekly gentle exercise programme, availability of professionals to discuss any worries, and the opportunity to meet other patients who have undergone similar heart procedures.

It was founded in 1988 and became a charity in 1990, organising social evenings, healthy lifestyle events, relevant interesting speakers and fundraising events.

Since inception, Rochdale Heartbeat has raised over £350,000 and have donated various items of medical equipment to both Royal Oldham and Fairfield hospitals, as well as donating 42 defibrillators to sports venues, gyms, community halls and churches throughout the borough of Rochdale and surrounding area.

The members of Rochdale Heartbeat were awarded The Queen's Award for Volunteers this year which was well deserved for all their hard work, support, and dedication to their charity.