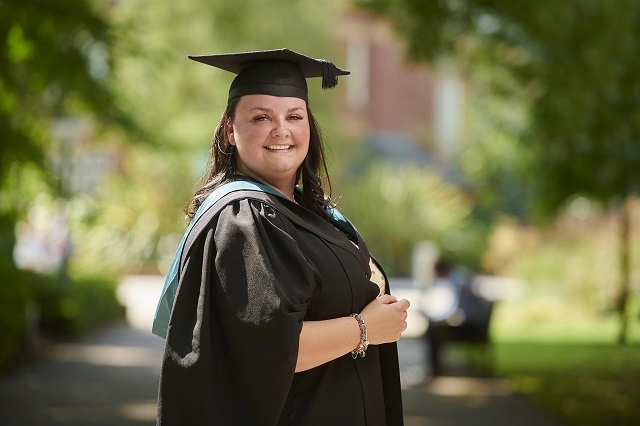 A Rochdale graduate who was forced to put her paramedic training on hold when she discovered that she was pregnant with her first child is celebrating landing her first role with the North West Ambulance Service.

Jodie Binns, 28, had no choice but to pause her first-year paramedic practice studies at the Edge Hill University’s Manchester campus in May 2018 after receiving the longed-for news that she was 10 weeks’ pregnant.

Jodie and her husband Kieran had been told by doctors that there would be very little chance of them conceiving naturally after Jodie was diagnosed with polycystic ovary syndrome (PCOS), a condition which can affect hormone levels and make it difficult to fall pregnant.

However, it wasn’t long into her time at Edge Hill that Jodie discovered the unexpected news that she was pregnant with their son Jack, who is now two.

Jodie recalled: “My life flashed in front of my eyes. I took about six pregnancy tests and I couldn’t believe it had happened.

“The support I received from Edge Hill was phenomenal; I can’t thank them enough and if it wasn’t for the guidance from some of my lecturers, including Kevin Armstrong, Karen Simpson and Andy Kirk, I probably wouldn’t have pushed myself to go back to university after having Jack, they were fantastic in helping me with that transition.

“It’s been really hard having to juggle motherhood and university, but it proves that having a child doesn’t mean you have to give up on your studies. You can do both, you just have to be prepared to work a little bit harder for it.”

Jack was born in December 2018 and Jodie made the decision to return to university the following October.

She said: “Having Jack gave me more of an incentive to want to carry on with my studies. I always want to make him proud and for him to be able to say to his friends that his mummy is a paramedic.”

It was an experience earlier in her life that had initially inspired Jodie to consider a career as a paramedic. Jodie’s dad, Alan, suffered a brain aneurysm when she was five, an experience which left a lasting impact on her.

Jodie said: “If it wasn’t for the paramedics, my dad wouldn’t have survived that day. So, I feel like I can relate a lot to the patient experience and the trust you place in paramedics in that moment when your loved one is in need of urgent care.”

Prior to studying at Edge Hill, Jodie undertook an access to higher education course to prepare her for university, but had to take time out of the programme to care for her grandmother, Nora, who had been diagnosed with breast cancer.

Nora sadly died in March 2020 but had remained one of Jodie’s biggest supporters when it came to her career, and pushed her to follow her dreams.

Jodie added: “My graduation day will be filled with emotion. My gran was my number one fan and motivated me to carry on with university after having Jack.

“It’s going to be hard because she won’t be there to celebrate with me, but I can imagine that she would be beaming with pride. It feels so surreal, knowing that I have achieved all of this on my own.”