You are Here: Home » News » News Headlines » No trains from Rochdale to Victoria for 16 days from this weekend due to improvement works 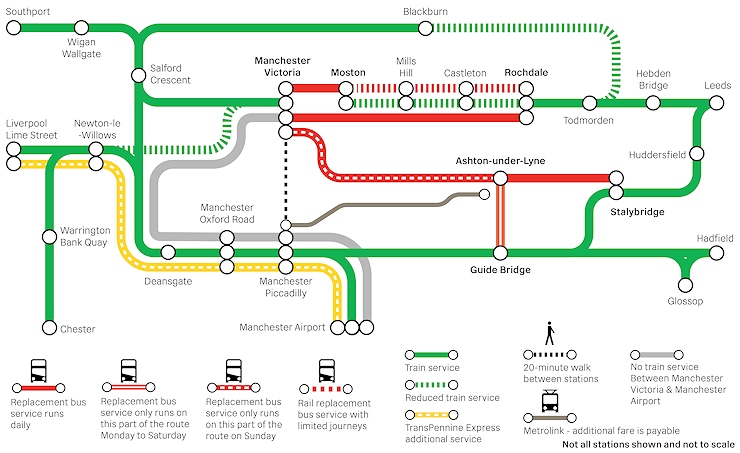 The line between Rochdale and Manchester Victoria will be closed for 16 days from this weekend as work to improve the railway as part of the Transpennine Route Upgrade begins.

The work will take place east of Manchester Victoria station, closing the lines towards Rochdale and Stalybridge.

From 31 July to 15 August 2021, trains will largely only run between Leeds and Rochdale, but some services will continue to and from Moston, serving Castleton, Mills Hill and Moston.

Customers making through journeys to and from Manchester must change at Rochdale and use the fast rail replacement bus service between Rochdale and Manchester Victoria. Please do not travel to or from Moston.

The lines will reopen on Monday 16 August.

The work forms part of the Transpennine Route Upgrade’s wider goal to deliver improvements along the full 76-mile Transpennine route – stretching from York to Manchester, via Leeds and Huddersfield.

The need to close the railway for 16-days is to provide enough time to refurbish and strengthen Dantzic Street underbridge in Manchester city centre, which has to be constructed from 38 sections due to surrounding constraints.

Once the bridges are reconstructed this will contribute to allowing for increased weight loading and creates the potential for a higher frequency of trains to run over them. The railway bridges that will be upgraded are Dantzic Street in Manchester city centre, Queens Road in Miles Platting, Bromley Street subway and Oldham Road.

The majority of passengers will be kept on the move by diverting trains onto different railway lines between Yorkshire and Manchester, with some journeys to be completed by bus - primarily between Rochdale and Manchester Victoria.

Passengers looking to travel over this period are being urged to check nationalrail.co.uk and continue to follow government guidance around the use of public transport.