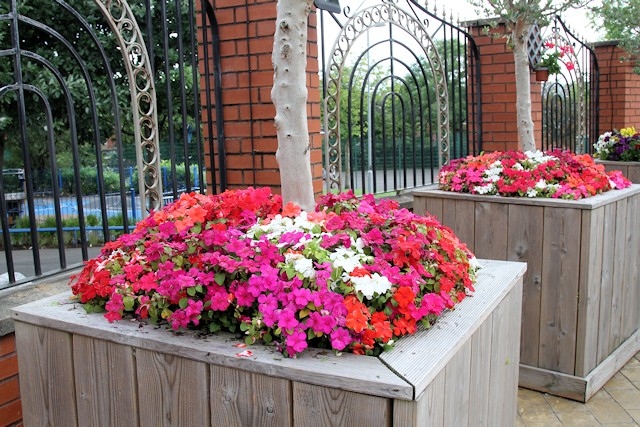 Planters at at Bilal Masjid

Judges were invited to visit five mosques across Rochdale on Monday (2 August) as part of the Royal Horticultural Society (RHS) North West in Bloom – It’s Your Neighbourhood competition.

Inspired by the Amaani Initiative - a family-run project ran by Asrar Ul-Haq which aims to encourage people to tackle climate change - five local mosques have all taken steps to help fight climate change, combat carbon emissions, and enhance the beauty of their neighbourhoods for ‘Masjids in Bloom’.

Supported by Rochdale Council of Mosques, the five masjids – Neeli, Central, Golden, Jalalia and Bilal – have each planted various trees, plants, and shrubs in preparation for the judges visit on Monday.

Starting the day at Neeli Masjid on Hare Street, the judges met Samar Mushtaq who showed them an olive tree that lives inside the building. The small olive tree had produced olives last year and it is hoped that it will continue to produce olives in the future. The judges also looked at the array of hanging baskets around the masjid containing double surfinia, trailing lobelia, geranium and trailing ivy.

Samar also spoke of the masjid’s plans to plant trees and plants around the masjid and the car park.

At Rochdale Central Masjid the judges were shown a variety of plants including pear trees, grape vines, strawberry, and cranberry plants growing in the grounds. The perimeter of the masjid had hanging baskets with begonia and white alyssum.

Walking down Mere Street, the judges viewed the front gardens where residents had created colourful displays with their plants and, with great pride, had organised their street.

Jalalia Masjid presented its hanging baskets which have brightened up the area and Dewan, a member of the mosque, told the judges of the work they do in the area supporting the local community. Dewan spoke of the ‘Big Clean’ the masjids have organised together which will take place in the next few weeks and how he ‘hopes to engage local organisations and the community to make the area cleaner and safer’.

The judges finished the day at Bilal Masjid where they were met by the Mayor of Rochdale Councillor Aasim Rashid, mosque leaders and volunteers, local councillors, Rochdale MP Sir Tony Lloyd, and Rochdale in Bloom representatives.

Here, the judges saw a number of olive trees, climber jasmines, trailing geraniums, spiral buxus, euonymus lollipops, pansies and African marigolds, to name a few. It was told how the planters were made by a local prison, HMP Buckley Hall, and all planting was done by local man Imran Aslam.

Imran said: “We just want to inspire the next generation into gardening, hopefully we can do that by passing knowledge on and adding a bit of colour to the masjids.

“The Covid-19 pandemic pushed us back, but we hope to also add some outdoor seating to the masjids where possible and polytunnels to grow our own plants and produce. We want to get all the children from the mosques and all the communities involved.”

The judges were informed of the work all masjids do within the community from supporting the soup kitchen, to raising money to help with emergencies, disasters, and charities locally and internationally.

Roy Down the Chair of Rochdale in Bloom, a volunteer run community organisation that acts as an umbrella group for over 40 individual community groups including Masjids in Bloom, said: “This is the first time a group of masjids have entered the competition anywhere in the country and we are very impressed with all the hard work masjids do to help their communities.

“I am confident masjids from other towns will follow on from the great work that we have done in Rochdale to improve the local environment.”

Mr Tahir Mahmood of Rochdale Council of Mosques thanked Asrar Ul-Haq of the Amaani Initiative for inspiring the Masjids to take action: “We are delighted that so many Masjids took part in the competition. Their hard work isn’t just about the competition, but about taking action to combat climate change.

“We hope by the action the Masjids have taken, our communities will think more about the environment and making sustainable changes in their behaviours, whilst at the same time keep their areas looking great.”

Councillor Sultan Ali, who has been a keen supporter of Masjids in Bloom, added: “I’m very pleased with what we have achieved with the trailblazer Masjids in Bloom initiative this year and I hope next year it will be bigger, better, and set the standard for other towns to follow. Our sincere thanks go to Imran Aslam who invested many hours ensuring the plants looked fantastic.”

Bernard Pendleton, Chairman of North West in Bloom and one of the two judges on the day, said: “We were extremely impressed with all the work being done to improve the outside areas, the hanging baskets, planters, and garden areas are beautiful. The environment activities are great.

“The community work is outstanding - particularly the wonderful charity work of delivering food parcels to the community during the pandemic. The work to support those less fortunate locally, regionally, and internationally is inspirational.

“The work in the community to improve the park adjacent to one of the mosques has been very well received by the local community. Neighbouring streets had been tidied up and we saw some wonderful horticultural efforts.

“We wish you all the best with your continued work, particularly the big clean up, and further outdoor improvement schemes. We are looking forward to returning next year and hearing about more outstanding community cohesion, horticultural and environmental achievements.

“Thanks to everyone who helped coordinate our day and make it so enjoyable.”

The results from the judging will be announced later in the year.

If you are interested in helping or want to get involved with the Amaani Initiative, please contact 07527 747 766.

If you are interested in helping or want to get involved with Masjids in Bloom, you can email rochdaleinbloom@gmail.com.