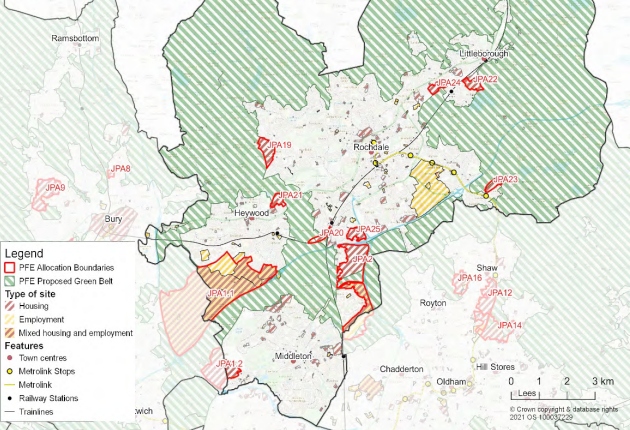 Places for Everyone - allocations in Rochdale

Places for Everyone – the successor to the Greater Manchester Spatial Framework (GMSF) – sets out what land will be freed up for development to meet government housing targets up until 2037.

Local councils across the conurbation – except for Stockport, which pulled out of the GSMF last year – have backed the draft document despite opposition from some councillors.

This means that Places for Everyone will now go out for an eight-week public consultation from today (9 August) until 3 October.

People will be asked if the plan meets ‘tests of soundness’ before it is sent off to the government for examination.

These include whether the plan promotes economic growth and makes provision for development, whether it is backed up by robust evidence; whether the plans are based on effective and achievable policies; and whether it meets national planning policies.

The consultation is the final stage in the preparation of the plan, which proposes to build 165,000 new homes – down from the 227,000 in the 2016 GMSF draft, and with a 60% reduction in green belt development compared to the first version.

Of these homes, 50,000 will be classed as affordable housing, with 30,000 available for social rent.

More than 55 million sq ft of office, industrial and warehousing space is also proposed across the nine boroughs.

People taking part in the consultation will be able to view the proposed development sites and read supporting documents online.

Hard copies are available to view at the libraries in the borough that are currently open - click here for locations and opening times.

This is a joint site with Bury. 1,200 new homes and a new primary school across Heywood and Pilsworth, delivering 1.2m sqm of industrial and warehousing space. This will utilise land between junctions 18 and 19 of the M62 motorway, close to Heywood Distribution Park. The site will be served by a new 2.2km link road from junction 19 of the M62. A new rail connection could also be developed from Heywood to Bury via Castleton, alongside the extension of the tram to Middleton. New bus links would connect the site with Heywood, Bury, Middleton, Rochdale and Manchester city centre.

This is a joint site with Bury. 1,550 homes to diversify the type of accommodation across the Simister, Bowlee and Birch and Langley areas; upgrades to the roads, traffic restrictions from Simister Lane, improved public transport. There are also proposals for a new primary school. Existing recreation facilities would be retained and enhanced.

This is a joint site with Oldham, the majority of which is in the Rochdale borough.
1,680 new homes, previously 900, and around 150,000 square metres of employment space, close to the Stakehill roundabout. There are also proposals for additional school place provision at Thornham St John’s Primary School and a potential new railway station at Slattocks. A section of the Green Belt will be retained through the centre of the site.

450 homes off Bamford Road, plus access points from Norden Road. Sports facilities in the area will be retained and significantly improved using contributions from the development. The proposals also include ensuring enough school places through expanding existing schools, or provision of new school facilities, access to electric vehicle charging infrastructure and cycle storage.

125 new homes and improving the open space around Castleton railway station. The land has also been earmarked as part of this scheme to enable the extension of the East Lancs Railway into Castleton, accommodating a temporary rail halt and associated parking, and potentially a tram-train trial project if progressed in this location. Proposals include pedestrian and cycling routes through the site.

250 new homes and restoring the Grade-II* listed Crimble Mill. The proposals also include enhanced recreational open space and land for the expansion of All Soul’s Primary School, access to the A58 and access to Mutual Street.

This proposal creates around 550 new homes (previously 360) on land south of Crown Business Park and contributes to a new primary school to serve Castleton. New walking and cycling routes will also be delivered as part of this allocation.

Salford city mayor Paul Dennett, who chairs the Places for Everyone joint committee and leads on housing for the Greater Manchester Combined Authority, has stressed the importance for people to get involved with the consultation.

The consultation will also be different to the three that were carried out for the three iterations of the failed GMSF, according to the Salford council leader.

Mr Dennett said: “Places for Everyone underpins a wider vision for Greater Manchester that will put us on the best possible footing to face the challenges of the future.

“It will mean we decide what kind of development takes place and where, maximising the use of brownfield land and urban spaces while protecting green belt land from the risk of unplanned development.

“It will benefit our places and help us recover from the pandemic, tackle housing inequality, and pave the way for a low-carbon economy.

“All nine councils have taken steps to make this consultation as open and accessible and possible, and will be engaging with residents over the next eight weeks to make sure everyone knows how they can take part and have their say.”

To take part in the consultation, go to www.gmconsult.org.