You are Here: Home » News » News Headlines » Much needed funds distributed to local causes thanks to Mayor's Charity Appeal 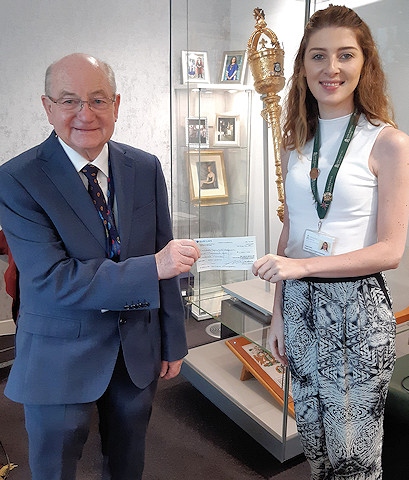 Councillor Billy Sheerin presents Sophie Ansley from Springhill Hospice with a charity cheque, pictured inside the Mayor's Parlour at Number One Riverside

The ex-Mayor of Rochdale, Councillor Billy Sheerin, has distributed cheques to representatives from his chosen charities at Number One Riverside.

​​​​​​Each year, the sitting Mayor of Rochdale raises thousands of pounds for local charitable causes through collections and organised events such as the MP’s dinner, Manchester Waterways Cruise, musical concerts, and the grand finale - the Mayor’s Civic Charity Ball.

The Mayor’s Charity Appeal beneficiaries change every year, as every new mayor chooses causes to support which are close or important to them.

All the money raised is collected and distributed at the end of the mayoral year.

For Councillor Sheerin, who unusually served as Mayor of Rochdale for two years instead of one due to the Covid-19 pandemic, he chose to split the funds raised from 2020 – 2021 between Springhill Hospice, Rochdale Connections Trust (RCT), Rochdale Shopmobility, Parkinson's and M6 Theatre.

Read more: Mayor of Rochdale distributes thousands of pounds worth of cheques to charitiesPublished: 15 August 2020

Councillor Sheerin said: “My charities continued for the second mayoral year, and we did manage to raise £1,000 for each of them, which was obviously much reduced but extremely welcome by all, because their incomes suffered badly throughout the various lockdowns.

“The money presented this year was much reduced in comparison to previous years as some of the biggest mayoral events, including my civic charity ball which I was so looking forward to, had to be cancelled for the second year running due to the pandemic.

“Nevertheless, I am grateful for the fundraising events I was able to hold throughout my second mayoral year and to the committee of volunteers who helped with the organisation and running of all the fundraisers. I could not have raised the amount I did without members of the Mayor’s Charity Committee who brought new ideas of fundraising to our Zoom meetings.

“I’m also grateful and so pleased that the public were so generous and supported my appeal.

“I love supporting local causes and it is important we continue to raise much-needed funds for them to be successful.”

Sophie Ansley, Fundraising Manager at Springhill Hospice, said: “We couldn’t be more grateful to Councillor Sheerin and the whole of his Charity Committee for their hard work and dedication over the past two years. To raise the amount they did under such difficult circumstances, we are just over the moon.

“Springhill Hospice will put this towards the continuing costs of providing our specialist palliative care services to individuals and their families in our community.”

“I would like to say a huge thank you to our previous mayor for the generous donation to Rochdale Connections Trust,” said Kathy Thomas, Chief Executive. “The money donated will go towards RCT’s new project working with mums and their children to repair and strengthen their relationship after they have experienced domestic abuse.”

Debs Palmer from M6 Theatre commented: “We are extremely grateful once again to receive funding from the Mayor of Rochdale’s charity. In an extremely volatile time for young people in the Rochdale borough, this funding will help us continue to support our local youth theatre participants, providing them with continuity of provision, fun activities, and a safe space to creatively express themselves and nurture the important friendships they have made.

“We will be collaborating with them to create a new Wellbeing Garden space at M6 Studio in Smallbridge as a legacy and reminder of this extraordinary time.”

Doreen Stott, the Vice Chair of the Parkinson’s UK Rochdale Branch, who accepted the cheque, said: “We were very grateful to be one of the mayor’s chosen charities in 2021 and to receive this donation of £1,000. The past year has been a tough time for people with Parkinson’s but through the group, we’ve managed to stay in touch and support each other.

“Now that we’re able to be together again, we are hoping to use the money to fund a trip later in the year, for local people living with Parkinson’s.”

Clare Root, Parkinson’s UK Network Support Officer, added: “Parkinson’s is the fastest growing neurological condition in the world. In the UK, there are 145,000 people living with the condition, including 16,387 in the North West.

“Our local branches can be a real lifeline for people living with Parkinson’s, their carers and loved ones. They are a space for friendship and support, and I’m delighted that the Rochdale branch will now be able to share a memorable experience thanks to this generous donation.”

Michelle Hollinrake received a cheque on behalf of Rochdale Borough Shopmobility from Councillor Sheerin. She said: “It was an unexpected donation to the charity which [also] received a cheque from the mayoral charity fund in August 2020.

“The executive committee were delighted to receive a further donation to boost much needed funds and would like to thank him once again for his magnificent fundraising during very difficult times.”