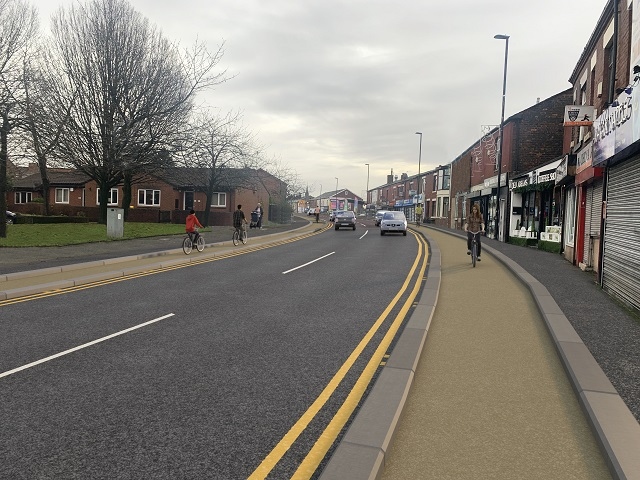 How the Castleton cycling scheme could look

Proposals to create a brand new dedicated cycling and walking facility in Castleton have moved a step forward following a public consultation held earlier this year, with more car parks to be created as part of the revised plans and a public meeting to be held next week.

The council, which is working with Transport for Greater Manchester to create the new lane between Station Approach and the Royal Toby Hotel, has amended the plans after reviewing feedback received as part of the consultation.

As on street parking will be removed to make way for the walking and cycling enhancements, the original proposals included provision for a brand new 32 space car park at Station Approach.

The cycle lanes immediately outside the businesses will allow for loading at certain times of day.

Cllr Sara Rowbotham, deputy leader of Rochdale Borough Council and cabinet member for climate change, said: “Over 300 people took the time to respond to our consultation and parking emerged as a clear area of concern for many of them. That’s why we took this away and worked with local councillors in the area, to address these concerns.

“This new cycling and walking provision will be a fantastic new addition to the area, As well as giving people healthier and more sustainable travel options, it will support the wider regeneration we’re spearheading in Castleton, which includes brand new housing developments on brownfield sites and the proposed extension of the East Lancs heritage railway line into the area.”

The scheme is part of the Greater Manchester wide bee network, which aims to create new cycle routes across the region, to improve the environment and boost health outcomes. It will be funded by Transport for Greater Manchester (TfGM), following a successful bid by the council and, at over £1m, the cash represents a major investment in the area. All the money is earmarked for walking and cycling, so can’t be used for other projects.

Major improvements to both the road and paths along the route are also in the pipeline, with a full resurfacing and repaving scheme set to accompany the creation of the cycle lane.

Cllr Rowbotham added: “This scheme will help create a much nicer pubic realm in Castleton in a way which balances the needs of motorists, walkers and cyclists. We’ve created the latest proposals in collaboration with local residents, businesses and local ward councillors, who have worked really hard to find a solution that should work for everybody. We’re grateful to those who gave us their views and helped shape this important project.”

People can find out more about the proposals at a public meeting on Wednesday 25 August, from 7 to 9pm at Castleton Community Centre.

A full business case will then be sent over to Transport for Greater Manchester before the council’s cabinet makes a final decision on the scheme in the autumn. If approved, the council is hoping to start work on site before the end of the year.

Longer term plans to further improve Castleton include the extension of the cycle lane all the way into Rochdale town centre.