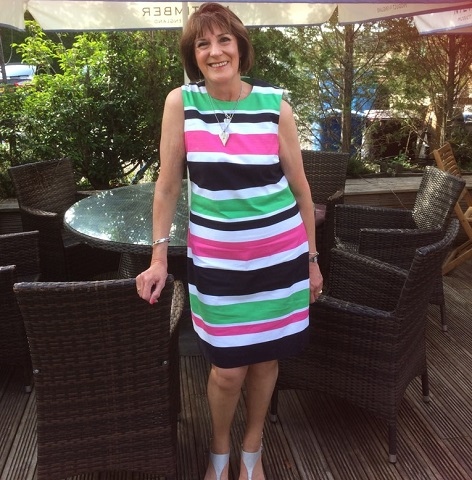 A retired lecturer from Whitworth who has been diagnosed with four different cancers in 20 years due to an inherited cancer predisposition syndrome has benefitted from an immunotherapy treatment made available by NHS England because of the Covid-19 pandemic.

Alyson Blud, 65, was diagnosed and successfully treated for cervical cancer 20 years ago, but since 2018 has been diagnosed with bowel cancer, lung cancer and pancreatic cancer.

Two different chemotherapy treatments last year failed to reduce a tumour in her pancreas and one of the chemotherapies led to her being hospitalised for six weeks. She was extremely weak for over a month and her daughter Lauren decided to fly over from Australia just in case the worst happened.

Alyson was one of the first patients at The Christie to benefit from an announcement made by NHS England on 3 August 2020 about making different cancer treatments available that leave patients less vulnerable to Covid-19. This covered the increased use of Nivolumab, which Alyson is now on, plus three other drugs - Venetoclax, Ixazomib and Atezolizumab.

NHS England committed £160m nationally to the scheme to pay for drugs that treat patients without having such a big impact on their immune system or offer other benefits such as fewer hospital visits.

Alyson, who is married to Michael, 69, added: “Hearing that I had cancer for the fourth time in 20 years was devastating and really hit the whole family hard. Having to go through treatment on my own because of Covid-19 was horrible. I didn’t have anyone who could hold my hand or hug me and let me cry on their shoulder.”

Alyson had been experiencing excruciating pain in her abdomen after flying back from Australia in the summer of 2018, having been to see her daughter, Lauren, 31, and her first grandchild ,Harrison, four. She went to see her GP and was promptly referred to a local hospital for surgery to remove a tumour from her bowel. No further treatment was considered necessary.

This was a huge shock for the family which had already been devastated by cancer. Both of Alyson’s parents had died of cancer and her sister Sarah had been through breast cancer twice, also being treated at The Christie.

After Alyson’s bowel tumour had been removed, a routine follow up scan indicated that there were several small tumours in her lung. These were removed through surgery and again no further follow up treatment was considered necessary.

However, a PET-CT scan in February 2020, carried out after the lung surgery, indicated that Alyson also had cancer in her pancreas and she was referred to Dr Hubner at The Christie in March. Her first course of chemotherapy was in late April, but shortly afterwards she was admitted to hospital following a bad reaction to the therapy.

Alyson added: “Dr Hubner was incredible and so were all the other staff involved in my care at The Christie. Everyone from the doctors to the domestics had time to share a smile or joke and they all worked together as a team to provide great care.

“The first lot of chemotherapy last year left me very ill and in hospital for weeks. Then, after I had recovered, they tried a different chemotherapy but that didn’t work – the tumour had grown to more than 5cm. I was running out of options and my family and friends had started fundraising for me to have treatment privately.

“Getting the call from Dr Hubner in August to say that the NHS guidelines had changed and that I could start on Nivolumab in September after a short break was a huge relief.

“The Nivolumab infusions are so much kinder to my body. I still get a bit tired after each treatment, but compared with the chemotherapy it’s a walk in the park. I have a friend who is a pharmacist and he has described it as the Rolls Royce of treatments.”

Alyson’s consultant at The Christie, Dr Richard Hubner, said: “Alyson was referred to me in March 2020 and I tried really hard to get her onto Nivolumab as patients with Lynch syndrome are much more likely to respond to immunotherapy. While my early efforts to get Alyson on a treatment programme for a similar immunotherapy drug were unsuccessful, I was happy in time to be able to give her the good news that NHS England was making Nivolumab available to patients like her.

“Prior to that, Alison had experienced significant side effects from the initial chemotherapy, and a second chemotherapy regime proved to be ineffective in controlling the cancer in her pancreas.”

“I’m very pleased with the progress Alyson is making now she is on Nivolumab. It has improved her quality of life significantly and at her last scan in December we saw that the tumour in her pancreas had significantly reduced in size.”

Alyson will continue with the immunotherapy for as long as it is fighting the cancer. Alyson’s best hopes for long term survival are if she can have the tumour surgically removed from her pancreas, a procedure known as the whipple procedure. However, as the tumour is large and situated very close to a blood vessel, this won’t be possible unless the immunotherapy shrinks the tumour further.

If surgery goes ahead in the future when she has recovered, Lauren has promised to take her to the French Polynesian Islands, including Tahiti.

Alyson has previously fundraised for The Christie charity in 2010 after her sister Sarah was given the all clear from breast cancer.