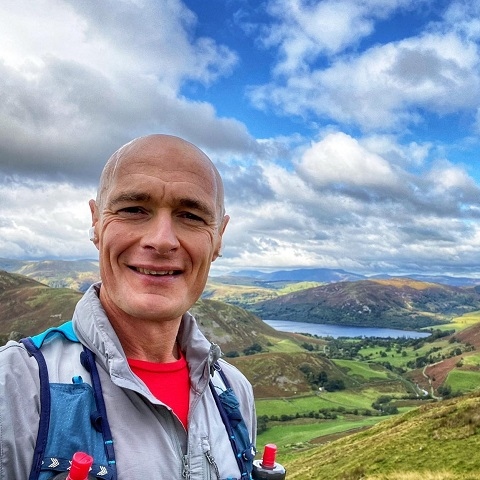 Gary Rothwell, who runs the Forever-Strong Fitness and Performance gym, set off at 7am on 22 August, running up and down England’s highest mountain a staggering 10 times over the course of 23 hours.

Before his challenge, Gary said: “Granted, it’s only 24 hours, and in the grand scheme of things, 24 hours is a very short time. But when you’re in the moment and you’re struggling, 24 hours can seem like a long time.”

He said: “I bought some avocado budgie smugglers because I’m now plant-based. I said if I raised £1,000, I’d do a trip in just those. I ended up doing four which got a laugh out of people and them asking what I was doing. One guy sponsored me £50 because I passed him five times on his way up.

“I met some great people on the hill who inspired me as well.”

The impressive feat is made more remarkable as Gary suffered a freak fall in Ashworth Valley during the summer, in which he received a double depressed skull fracture, a dislocated knee and a cracked pelvis.

Gary explained: “I set the challenge after recovering from my fall. I fell 20 feet down a rockface at Ashworth waterfall where I landed on my head in the water. I crawled out of a 60ft earth bank onto the road, rang my wife and asked her to meet me at the junction of Clay Lane – some half a mile away – where she drove me to hospital.

“All this happened in the space of 24 minutes; I think my Army training kicked in to get me out of the situation. I was in hospital for a further five, six, days and I wanted a challenge to focus on; I didn’t want to feel sorry for myself and wanted to show what you can achieve if you set your mind to it.”

Gary continued: “It was easy during the day because there were people around, but at hill seven, I had a tear in my eye and wanted to stop. I thought ‘I’ve only got three more’ but then realised that was another eight hours in the dark. The donations received before made me commit and the notifications of donations coming in when I was running kept me going. It was hard work towards the end.

“Each time I reached the summit, it was cloudy, and you couldn’t see anything. On my last ascent at 6.30am, there was a beautiful sunrise, so I sat at the top for an hour enjoying the scenery. I couldn’t have done it without David Shaw, my support crew who supplied me with brews, soup and goodies through the day and night.”

In total, Gary covered an astonishing 55 miles and has raised over £2,700 for Movember, the men’s mental health charity.

He said: “I’ve had a tough time with mental health over the last 18 months so I wanted to try and raise £3,000 for Movember. I’ve suffered before now and reaching out does help. The statistics for male suicide are crazy: anything we can do to help raise funds for research, signposting people to the right place, shows that care is needed.”

Donations in support of Gary can still be made via the Movember website for another week.

As many as one in four adults and one in eight young people will experience a mental health problem. In the UK, men are three times more likely to take their own lives than women and are less likely to seek help for mental health problems. Suicide is the most common cause of death for men under the age of 50, whilst the highest rate in England occurs amongst men aged 45-49.

When life is difficult, Samaritans are here for you – day or night, 365 days a year. You can call them for free on 116 123, email them at jo@samaritans.org, or visit www.samaritans.org to find your nearest branch.

Andy's Man Club Rochdale provides men with a safe space to openly discuss their worries and mental health concerns. If you would like to attend, please email info@andysmanclub.co.uk or message the Facebook page.